Son and mother arraigned in shooting of 12 year old

Girl shot and killed over a cell phone dispute.

A Detroit man and his mother were arraigned on Sunday via video for the murder of 12-year-old Kade’jah Davis. Joshua Brown, 19 is accused of shooting and fatally wounding the young girl through a closed door, inside her house, last Tuesday. Magistrate Steve Lockhart believes that the mother, Heather Brown, 35 who is charged with accessory after the fact is “grossly undercharged to this court’s mind”. 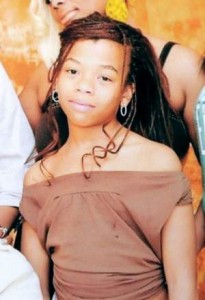 Both Brown and her son entered ‘not guilty’ pleas. Bail was set at $50,000 for Heather Brown. Both remain at the Wayne County Jail. The prosecuters in the case say that Joshua Brown went to the girl’s house to confront her mother over a lost cell phone. It turned out that Amanda Talton, Kade’jah’s mother, had phone a cell phone at her tax preparer’s office and turned it in earlier in the day, so she told her daughter to tell Brown that she did not have the cell phone, which she did, and then shut the door. That’s when Brown got angry and fired the shots through the door, killing Kade’jah. They both face a preliminary hearing on February 17th. If convicted, Joshua faces up to life in prison.

Kade’jah Davis was a sixth-grader, whose favorite colors were blue and purple, her favorite food macaroni and cheese, and she liked to play baseball and football. Talton said that her daughter loved school, and wanted to grow up to be a computer engineer. Talton feels empty without her daughter, saying “It’s like I’m lost without a trace.” Prosecutor Kym Worthy says that “It is a terrible thing to realize that an innocent child was senselessly killed because a gun was fired in a dispute allegedly over a phone.