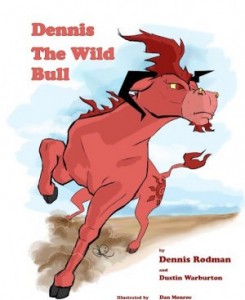 NBA Hall of Famer, Dennis Rodman, 51, is scheduled to have a children’s book published by years end. The former 5-time NBA champion and Chicago Bulls power forward wrote his book with the hopes of compelling children to overcome their obstacles in order to achieve their goals. Rodman, who has had his share of career highs and lows, is currently on a self improvement campaign after being known for years as a “bad boy”.

Rodman is the father of two children, a 10-year-old son and an 11-year-old daughter with his estranged ex-wife, Michelle Rodman. The pair went through a nasty custody battle which played out in public earlier this year. Michelle sued Rodman for upwards of $800,000 in back child support. A settlement was reached back in April 2012. Rumors of Rodman’s financial woes also played out in the public arena as well as his alcohol addiction. Rodman was a celebrity patient on VH1s “Celebrity Rehab”, where he signed on in the 2009 season to help get him sober.

Rodman has recently reunited with his mother and father says he’s looking forward to working on strengthening his relationship with his kids.

“Dennis The Wild Bull” can be pre-ordered at wildrbull.blogspot.com