Teen survives after a spear is shot through his head 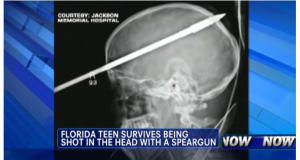 A teenager is Miami is lucky to be alive after a spear went through his skull in a spearfishing accident.

The spear was being loaded by Yasser Lopez’s 15-year-old friend when it accidentally discharged a spear into Lopez’s head on June 7th. It entered his head one inch above his right eye, and the tip came out of the back of his skull. “You could feel the tip under the skin on the posterior part of the skull,” said Trauma Care surgeon Dr. George Garcia told Latino Fox News.

When admitted to the hospital, Lopez had three feet of spear coming out of the front of his head. He was conscious, and able to communicate. Neurosurgeon Dr. Ross Bullock said that leaving the spear in may have saved most of the boy’s functioning and possibly his life. “The most important thing is to resist that temptation to pull the thing out. It was possible for us to figure out a strategy during the operation to be able to unscrew the tip of the spear, instead of having to get this whole spear dragged out through his brain.”

Lopez, 17, is in serious condition at Jackson Memorial Hospital’s Ryder Trauma Center. He is expected to make an almost complete recovery. He has no memory of the accident.