Hero teen conquers all to graduate 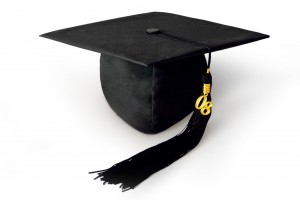 Thursdays night graduation ceremony at Bloom Township High School was a point of celebration for many, but for one high school graduate it was a celebration of life and victory.

Matt Brown, 18, received a standing ovation as he was wheeled onto the stage to receive his certificate.

The Chicago teen was a victim of a hit-and-run accident on March 17th after he pushed a younger cousin and little brother out of the way. Brown suffered a fractured femur, head and neck injuries, and broken ribs. Despite multiple surgeries, doctors were unable to save his right leg and it was amputated on April 2nd.

High School Principal Rhona Israel described Brown as an excellent student with academic excellence. At school he was active in the gospel choir and Reserve Officers’ Training Corps. School officials visited him in the hospital, bringing him a yearbook and his royal blue cap and gown.

The graduating teen arrived at the high school via a minivan and was accompanied by a Dr. Douglas Koltun, a pediatric specialist.

“You only graduate high school once, and we realize that,” Koltun said.

At the time of the accident and even later, attending graduation “seemed like a pipe dream,” said Koltun, who leads Brown’s rehabilitation team. The goal of his rehab team was to help Brown achieve his goals, one of which was to graduate high school with his friends. His physical therapy sessions specifically prepared him to be able to stand up, shake hands and accept his diploma.

“Just this past week, he realized this was possible,” Koltun said. “He was very motivated.”

After the ceremony Matt had to return to the Hope Children’s Memorial Hospital in Oak Lawn, Ill

The high school graduate now has a goal of attending Prairie State College to where he plans to obtain an associates degree in criminal justice, and later a bachelor’s degree. Matt Brown has ambitions of becoming a crime scene investigator.