On Sunday, 26-year-old newlywed Estrella Carrera was found stabbed to death in a bathtub while still wearing her wedding dress.

The couple had been married on Friday in the Chicago City Hall. Friends and Family attended a dinner and then spent the remaining of the evening at a Chicago nightclub. The couple was last seen around 4 a.m. Saturday morning.

Relatives have stated that the wedding was a spur-of-the-moment.

“She didn’t want to tell me she had gotten married,” her cousin Sandy Lopez said Monday.  “She didn’t tell anybody besides her father the day before.”

On Sunday Carrera had failed to pick up her two children and her sister became concerened so she requested a well-being check, where the police found Carreras body in the bathtb.

Mr. Jiminez is the father of Carrera’s 2-year-old son and according to relatives they had an on-and-off relationship for about three years. Carrera also has a 9-year-old daughter.

Jimenez has a prior conviction for deceptive practices and in 2003 he was charged with domestic battery, charges were dismissed after the complainant never appeared in court. 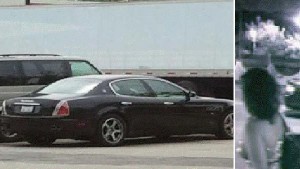 (Burbank Police Dept. / May 15, 2012) Arnoldo Jimenez was seen driving this 2006 Maserati after the slaying of his bride, Estrella Carrera pictured here after her wedding.