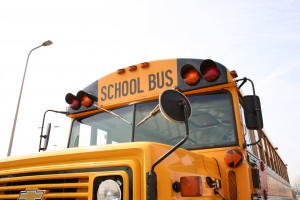 A 13-year-old boy in Washington State is credited with saving a bus full of his schoolmates and the driver after he drove the bus to safety.

Jeremy Wuitschick said that he was riding the bus to school on Monday morning when he noticed something was wrong with the driver. “He starts acting all funny,” he said. “His eyes are bulging and he is twitching in his chair.”

Surveillance video from the bus shows the boys quick reaction as he darts from his seat to take the steering wheel.

“I was just thinking I don’t want to die,” Wuitschick said. “I turned to the right. Turned to the side of the road. Took the keys out of the ignition. We started slowing down, and I said, `Somebody call 911!”‘

Jeremy and another student, Johnny Wood, attempted CPR on the driver. A school administrator came upon the bus shortly after it was pulled over and stopped to help the boys.

Police quickly arrive and escorted the 12 students off of the bus. The driver was still breathing as he was carried off the bus by paramedics and taken to a nearby hospital.

“Everyone was asking questions,” Jeremy said. “’Whoa there’s a bus over there what did you do Jeremy?’ I was just like ‘Well I just drove the bus to the side.’ Everyone is excited about that!”

Jeremy said he wants to take a CPR course now. “When something major happens, I look back to see if there’s something I could’ve done better,” he said.

The Fife School District has not released the name or condition of the driver.