Skip to content
FILED IN: Crime and Punishment - Death/Loss

Chicago teen held in murder of young mother and two others

Trio shot to death after picking up birthday cake for one victim's 2-year-old daughter. 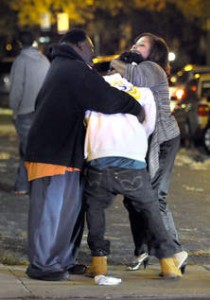 Three 21-year-olds were shot to death in a Chicago parking lot after picking up a birthday cake for one of the victim’s daughter about 5 p.m. on Saturday.

Chicago police have a 17-year-old in custody today, after witnesses picked him out of a lineup.

Reports say the three – Chanda Thompson, Cortez Champion and Shawn Russell – were shot to death in their vehicle outside a Church’s Chicken which shared the parking lot on King Drive with A Piece of Cake Bakery stated the Chicago Sun-Times.  The trio had been at the bakery to pick up a birthday cake for Thompson’s 2-year-old daughter.

The shooter allegedly drove up to the vehicle and began shooting, before leaving the scene.

The motives for the killings are unknown at this time and charges have not been filed.

Thompson was pursuing a nursing degree at Olive-Harvey College Saturday according to her brother, Joshua Thompson, 22.  Thompson, who lives in Calumet City with her boyfriend, also works at a South Side daycare facility, he said.

It is reported the family continued on with the 2-year-olds birthday on Sunday, unsure of how they were going to tell the child of her mother’s demise according to myfoxchicago.com.

“She was working, going to school and raising a two-year-old,” her brother said. “I don’t understand why this happened. She was my best friend. You couldn’t meet a better person. Everyone called her ‘Smiley’ because she was always smiling.”

He added, “We still had the birthday party for Nazhia…we tried to keep our spirits up, but it was hard.”

Family members decorated with balloons, but they could not retrieve the birthday cake from the car so they bought another one, Thompson said.

“I don’t know what happened, but I know those bullets were not intended for her,” he said.