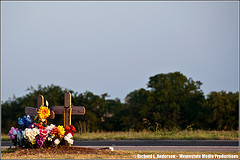 Taylor Stinchcomb, 15, was heartbroken to learn that her 4-year-old Doberman pinscher, Romulus, was diagnosed with cancer. When her parents talked about putting the dog to sleep, her loyalty to her dog drove her to load Romulus into her parents’ minivan without permission and flee the house, a trip that ended in tragedy as she and the dog perished in a car crash.

Stinchcomb, of Gurnee, Illinois, had picked up a friend, also 15,  when she fled.  The friend was behind the wheel when the van went off a rural road and struck several trees and a utility pole. Stinchcomb was killed in the crash, while the driver suffered minor injuries.

“[Romulus] was with her till the end, literally,” family friend Casey Fallos said.

Some remembered Stinchcomb as a good student, dedicated athlete (softball) and enthusiastic volunteer who was so enamored with creatures great and small that she wanted to become an “animal cop.” Her sister, Mallorie Holler (26) said “She loved animals, and she was very, very spirited…She loved her dog more than anything.”

Stinchcomb was to be a sophomore at Warren Township High School, where she played on the softball team, giving her all on the field and cheering vigorously on the bench, according to her coach.

Romulus was diagnosed with cancer about two weeks ago, Stinchcomb’s sisters said, adding that while the family was pursuing advanced medical treatment for the dog, they discussed the possibility of euthanasia.

Psychologist Stephanie LaFarge, senior director of counseling services at the American Society for the Prevention of Cruelty to Animals talks of the special bond teenagers have with animals. “Teenagers often feel that they want to protect the things they love.”

Lake County sheriff’s Lt. Christopher Thompson said Stinchcomb put the animal in her parents’ Dodge minivan and drove away, apparently wanting some time to grapple with her emotions. After picking up a friend she asked that friend to take the wheel when she became too upset to drive.

They were apparently headed home at a fast pace — at least 25 mph over the 35 mph speed limit — when the friend lost control, Thompson said. The minivan went off the road and into a patch of trees, hitting several of them and a utility pole.

Stinchcomb, who apparently was not wearing a seat belt, was talking when she was extracted from the wreckage, then she died of multiple internal injuries an hour later at Advocate Condell Medical Center in Libertyville, according to authorities.

Thompson said that no decision has been made about possible charges against the underage driver, whom authorities have not identified.