Relief in sight at the pump as investors get cold feet

After topping out at $4.00 per gallon, anylists are predicting a 50 cent drop in the price of gas by June.  This is welcome news for consumers after 44 days of steady increases. 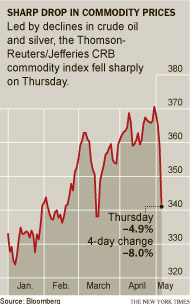 The drop was due to a sharp sell-off in commodities this week. Analysts say investors/speculators got nervous that oil, metals and grains had risen over the past few months to unrealistic heights.  “This move wasn’t about supply issues, it was people hedging and people investing,” said one senior market strategist at a Chicago futures brokerage firm.

The plunge in cost should ease the pain at the pump which is good news for families and businesses. As prices soared this year, surveys showed that motorists responded by driveing less.  That would have been a blow to the sluggish economy since most people cut back on fuel only after curbing spending on other discretionary items like vacations and electronics.

Gasoline prices had exceeded the national average in many states.  In Chicago, prices were a staggering $4.45 and were hitting small business owners hard.
It will be hard to predict how long the relief will last.  Libya’s oil production has not been restored, the 2011 hurricane season is just starting and world demand is growing, all factors that could affect price.
http://www.google.com/hostednews/canadianpress/article/ALeqM5hj88c7FHQyJBGM_KANgmkZZHlphg?docId=6772544