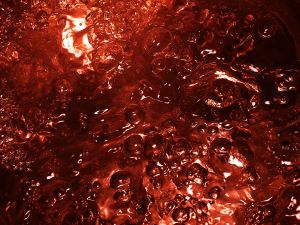 16 month old son, Jabraylon Bables, and dipped him into a pot of boiling water. According to The Dallas Morning News, the baby suffered for 36 days before succumbing to his grotesque and brutal injuries. He was presumably in agonizing pain, as his burns covered most of his lower body and melted the skin off his body and of which subsequently became infected. Jabraylon’s biological father has been in prison most of his young life and has only been able to reconnect with him 2 months prior to the assault on the child.

The mother, Jasmine Thompson, appears to be supportive of her boyfriend whom she met after the baby’s father went to prison and who has allegedly tortured her defenseless baby, calling him a “good person”, even though he spent 15 years in prison for murdering another man.

The remaining days of Jabraylon’s life were spent in a hospital room hooked up to a battery of tubes and a breathing machine. The skin had melted off his legs and feet. Burns covered his right hand up to his wrist.

Doctors removed about 60 percent of his badly damaged intestines during one surgery. They removed more during a second surgery. Infections wracked his small body. He suffered kidney failure and his body swelled to the point where he was unrecognizable.

There is a special place in hell for a mother and man like this.