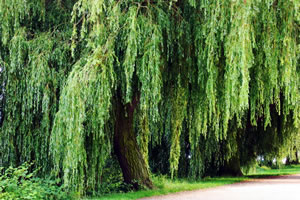 I hate willow trees and my daughters used to be in diapers.

Let me elaborate — travel back with me to the 1970s. Disco is in. “The Six Million Dollar Man” is on at 7:00 pm. I am in the fifth grade. This is the era of bell-bottoms, Chuck Taylor, and long before parents had heard of “time out” as a form of discipline.

This brings me to willow trees. Willow trees produce one other thing besides aspirin and small leaves. They produce switches. Naturally, it is a well-known fact in this modern, enlightened era, that corporal punishment is child abuse. Parents didn’t know that in the 1970s. As horrible as it may seem by today’s standards, switching was a common form of punishment in rural America. My mom was a world champion switcher. She believed in the Bible. She didn’t “spare the rod”, or in my case, switch. In fact, when the U.S. Olympic Committee briefly considered switching at the international level, they approached my mom to be both team captain and coach.

Those of you raised in the country know where I am going with this. A fifth grader acts up. That same fifth grader is caught. For some reason getting caught was the easy part. After getting caught the ordeal was to begin. First, you got the SPEECH. Anyone who has ever been a kid knows the speech to which I am referring.

Next, came the really enjoyable part, getting sent to fetch the switch for the whipping that was to come. Of course, the whipping couldn’t start until after the “this hurts me more than it hurts you” litany was invoked. Back then I wished mom and I could trade places to test that theory. I have children of my own now, I know the truth of that statement.

Back to fetching the switch — I had to walk to the willow tree in Old Man Barton’s yard. No bike. No horse. The walk was necessary. The walk allowed time to reflect upon the misdeed. Ever wonder what a death row inmate thinks about on the way to the gallows? Ask any kid ever sent to fetch a switch.

Finally, the tree looms near. Those drooping branches that seem to mirror my drooping spirit, swaying deceptively gentle, in the evening breeze. I knock on the front door of the white frame house and ask Old Man Burton if I can pick a switch. He has never said no before, but there is always a brief flicker of hope. “In hot water again?” the old man asks, as he spits a stream of Brown Mule juice in the Folgers can he always held. That same question every time, as if me standing there wasn’t answer enough.

“Yes, sir,” I reply. I might have thought it was a stupid question, but to back sass an adult? I had misbehaved, not taken complete leave of my senses.

I briefly think of picking one of the green ones, the ones with the stiffness of a cooked spaghetti noodle. No, I did that once before and had to take the walk twice. So I pick a “goodun’”, and head back up the hill, picking the leaves off one by one. The green teardrop shapes are precursors of the real tears to come, trailing fear all the way back to the blue trailer on the hill. I get home and take my switching. I don’t bother to run because mom is fast and accurate. The switch raises red welts and my moral values.

After the whipping was done, I got handed the switch to do with as I pleased. A peace offering of sorts, I guess. I could break it, stomp it, anything I wanted. Of course, destroying the switch didn’t stop the pain. Revenge seldom does. For a few seconds though, I was the most powerful child in the universe. I was a hero breaking the talisman of parental tyranny for fifth graders all over the world.

Looking back, I suppose it all balanced out. Mom tanned my hide and then, later, like all children, I broke her heart. Now that I am older and have daughters myself, I see her side of things a bit better.

But, I still hate willow trees.