Whose Poop Is This? 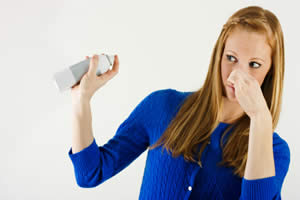 When you mix together three kids and two dogs, you’ve got a recipe for copious amounts of unidentified shit. You’d think by now I could tell who left what shit where, but that’s not the case. Let me give you some examples…

I’m attempting to potty train my son Jason. I’ve resorted to letting him run around diaper-less while trying to monitor him, putting him on the potty when he displays ‘defecation behavior’ (the white-knuckled gripping of any sturdy surface while squatting and grunting like a feral monkey). I can tell you from experience that this method of potty training doesn’t work when you’re a single mother. There’s way too much going on to follow a bare-assed baby around the house.

Fifteen minutes into my new experiment, I found him in the closet naked from the waist down, pointing to a big pile of crap. He had a terrified look on his face – apparently he was frightened of his own shit. I was forced to ask the obvious question:

“Whose poop is this?”

Okay, I didn’t really ask, I yelled it at the top of my lungs while Jason clung mightily to my leg. I looked down and realized that the remainder of his clandestine crap was dangling from his ass. That was all the evidence I needed to pin it on him.

Not long after my failed potty training experiment, another turd appeared on my dining room floor. This time I knew it wasn’t the baby, as he was properly diapered and enjoying his mid-afternoon nap.

“Whose poop is this?” I yelled from the dining room.

Based on the stench and consistency I could tell it was recently deposited. I’m skilled at differentiating fresh shit from old, petrified shit. I’ve seen enough loads of crap in various settings that I’ve become a fucking shit archaeologist.

Both of my girls came running into the dining room. Jillian, my six year old daughter, piped in:

"Well, dear", I thought, "I certainly hope it wasn’t you. You’re fucking six years old and if you’ve taken to randomly shitting on my dining room floor, we’ve got bigger problems than this here pile of crap."

I saw the puppy skulk by; his tail was suspiciously planted between his hairy little legs. He’s been nothing but a shit machine since the day we took him home. What was I thinking when I brought another living, breathing thing into my house that couldn’t control its own bodily functions?

As any good mother would do, I ordered my kids to pick it up. But I should have said "clean it up" because to them, "pick it up" meant just pick up the pile and dump it in the toilet, not wipe the floor underneath the pile.

Later on, I happened by the seldom-used upstairs bathroom. The smell coming out of that room was beyond revolting and, being a somewhat responsible mother, I was obligated to make sure there wasn’t a dead body hidden in the linen closet.

I discovered I would have preferred the dead body.

I peered into the toilet and screamed:

“Whose poop is this?”

Jason, who had recently taken to mimicking my screaming tirades, repeated my words in his baby talk.

At 2 1/2 he still doesn’t speak well. When his speech impediment is coupled with the bad haircut he got from his father’s blind barber, he reminds me of Curious George without the fur.

Jillian sheepishly bowed her head and denied the shit was hers. Under a scathing and skilled cross-examination, she finally confessed.

“It’s my poop, mom. I didn’t flush it because I was afraid it would clog the toilet and flood the bathroom.”

Really? I have two children who have shit-related fears? How peculiar…

“Tell me, Jill, exactly when did you deposit this load in the toilet?”

“When it came out of my bum.” She answered innocently.

“You ‘think’? You ‘think’ you took a shit two, maybe three, days ago and didn’t flush it due to flooding concerns? This pile of putrid crap has been floating in this toilet for two full days? And nobody who inhabits this floor of my house has seen it or even thought about straining their grubby little hand by pushing the handle and getting rid of it? That’s a load of crap!”

“Um, mommy, you shouldn’t say ‘crap’. My teacher says you should use the polite word for poop, which is ‘feeshes’.

“Jill, it’s pronounced ‘feces’ and I don’t care what your teacher calls it, would it be so hard to flush your own shit down the toilet?” I screamed.

Jason stood behind me, in full mimic mode:

“Ood it eeee so aard to ush ur on it own da doilet?” he bellowed while wildly flailing his baby arms above his Curious George head.

I ignored my monkey baby. Through clenched teeth, I ordered her to flush the toilet.  My stomach lurched as I realized that something was missing from that bowl. Something should have been floating alongside the offending blob of shit. But the shit stood alone.

There was no toilet paper in there!

Not only had she left two-day-old shit in my toilet, she hadn’t even had the decency to wipe her ass when she finished! My kids are pigs! They get it from their father’s side of the gene pool.

A few hours later, I noticed a foreign pile of shit in the middle of the kitchen floor. I approached the offending mound, attempting to identify the culprit prior to making any accusations. This was where my archaeological shit training came in handy.

“Okay, whose shit is this?”

I was done with using the word ‘poop’. This pile of shit had put me over the edge. It was the shit that broke the camel’s back.

All three of my kids scrambled to attention at the kitchen door. The girls were trying to cover up their devious smiles. Jason was running at full speed, heading straight for the unfamiliar poo.

"Nicely done Jason" I thought. He was finally expanding his vocabulary. See, I am a good mother.

I looked over at the girls and they were laughing uncontrollably. Jill ran over to the shit (oh, excuse me, "feeshes") and scooped it up with her bare hand. I flinched in horror as she held it out toward me, as if offering me a cookie.

I stared at the rubber crap in Jill’s hand and I did the only thing I could do — I laughed so hard I cried. My girls may have inherited their hygiene habits from their father, but it was then I realized they got my sense of humor.

As punishment for freaking out their mother with faux feces, I banished them to the backyard to perform the most dreaded chore in the entire world — dog doody duty. I even sent the baby out there with them. He was surprisingly talented when it came to finding the dog shit piles.

I stood at the kitchen window, smirking to myself and watching proudly as my little guy ran from shit stack to shit stack screaming: