Who Reincarnated the Electric Car? 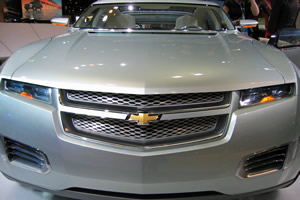 I may not be a tree hugger, but I can envision a future beyond the middle of next week. And I’m always in favor of saving a buck or two whenever possible.

Conversely, I’m reluctant to sacrifice style – along with tens of thousands of dollars – for a hybrid that is relatively attractive but gets only marginally better gas mileage, or for a fuel-efficient hybrid that is…well, not my style at all. Put me in a V8 beauty and let me burn up my great-grandchildren’s future instead.

Just kidding. Sort of — GM is on their way to reaching that pinnacle where style and efficiency peacefully coexist.

Not only has GM reached out to bloggers in a way that no other major corporation has done, they’ve also put their money where their mouths are when it comes to production and concept vehicles. 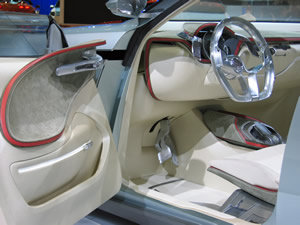 I attended the Chicago Auto Show as GM’s guest, where they wined and dined me and put me up in a lovely room where no toddlers attempted to climb into my bed at 3 a.m. They also arranged exclusive interviews between bloggers and top-level GM executives. I had the privilege of meeting with Ed Peper, Chevrolet’s General Manager. I asked him about the ways in which GM is incorporating energy diversity into their new vehicles:

In talking to Ed Peper and to the designers of the Chevrolet Volt, what truly impressed me was the excitement they all shared. GM isn’t being dragged, kicking and screaming, into the future. Nor are they dreaming up fanciful ideas of futuristic vehicles that will never be built. They seem to genuinely embrace the challenge of designing vehicles that will appeal to a wide audience – that will win hearts and minds here in America and around the world.

Ed. note: Besides providing travel and accommodations to the auto show, Ms. Marsh received no other compensation from General Motors