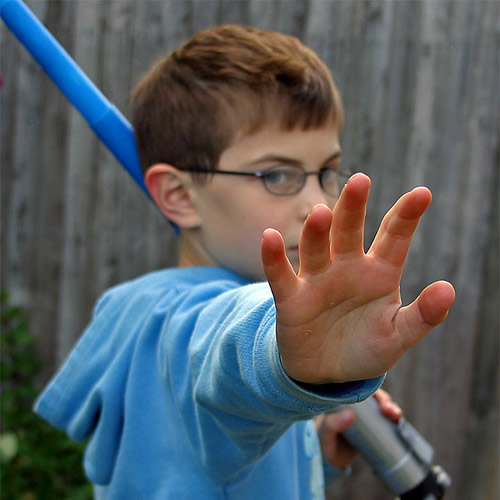 I married a man that drank from coffee mugs that were molded into the faces of the Star Trek crew. In his apartment, he had Star Wars action figures, still in boxes, nailed to the walls of his bedroom, and displayed with more care than grandma’s fine china. Our engagement photo was doctored to give us Vulcan ears. Despite my disinterest in space fiction, we clicked. I certainly married knowing our offspring had the potential to become Jedi.

We have three children now, two boys and a girl. My boys have adopted their father’s love for Star Wars and Star Trek. My daughter has a tolerant but shared boredom with me.

When my sons were just toddlers they were promising palaeontologists. They could pronounce “styracosaurus” with the same ease as “Mommy.” I bought my children dinosaur books and we watched documentaries on the Discovery Channel. I could pick up a plastic dinosaur at the store and ask them to name it and they never answered incorrectly. They were so interested in prehistoric times, that they often asked me to simply read the name of dinosaur parts from our Encyclopaedia of Dinosaurs book. I gladly mispronounced those 15 letter words to foster my sons’ love of learning.

I also impressed my mom by putting my sons on the phone and asking, “Name your favorite dinosaurs!”

“Pachycephalosaurus! Iguanodon!” they would say in such cute baby voices.

But that was a few years ago. Unfortunately, my palaeontologists have become Jedi. In the last two years, their zeal for dinosaurs has found a new home in the Star Wars series. The dinosaurs in the toy box are now crushed by the Storm Trooper helmet, the massive Star Wars Lego sets, and the four light sabres (two of which I warned vigorously, “You’re going to regret spending your allowance on another!” They didn’t.)

Unlike the enchanting dino phase, this phase is marked by being mocked when I don’t know the difference between a Storm Trooper and a Bounty Hunter. Their voices now lack the same childish pronunciations when they roll their eyes and ridicule me for the mix up. When I tell them this makes me cool, they only laugh at the preposterous suggestion.

I'm just not designed for space fiction. I make Star Wars fans groan because I often call “lightsabers” “light savers.” It makes sense that I confuse the two because I rarely said it aloud. It makes even more sense, because for the majority of my life, I didn’t give a damn. When in doubt, I call them swords because I don’t want my boys to laugh at my mistake. Realizing I’ve become intimidated by Star Wars inaccuracies has ushered me into a curious phase in my own life.

My children will often run around our neighborhood with their friends yelling, “There’s a force field, be careful!” “Stay away! He’s a Sith!”

I’ve been waiting for someone to come in crying from being whacked by a lightsaber, but it hasn’t happened yet. From what I gather, my children have become fine Jedi and are maintaining peace throughout our galaxy. I suppose I should be proud, but the delightful roar of the toy T-Rexes have been replaced by the incessant sounds of laser blasts and space ship engines.

Birthdays and holidays come along, and the Star Wars merchandise strikes back with overpriced toys, five times the price of what they are worth. The movie was realized in 1977 and still little boys all over the world are putting these toys at the top of their wish list. The bright side is that we can all mindlessly shop for boys ages 5 to 10.

I had some hope recently that the dinosaur phase hasn’t passed when I put my son to bed and he asked me to pass his dinosaur encyclopaedia. Another day, my daughter was flipping through a dinosaur book and asked a question about pteranodons.

With excitement I turned to my boys and said, “Ask the Jedi. They know everything about pteranodons!”

And sure enough, two worlds collided— science and Science Fiction—when my boys answered all my daughter’s questions beautifully.

But I know I have more to endure. When you marry a man who’s been a member of the same Trekkie message board for ten years and owns all the Star Wars movies—even puzzles and posters—resistance is futile. My little boys can’t help themselves. While dinosaurs are fascinating, there’s space fiction in their DNA.