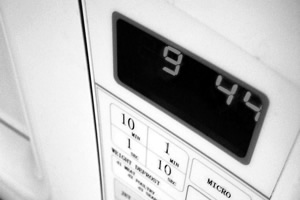 My eight-year-old son is ensconced inside a fence of couch cushions on the living room floor. Miniature monsters are ascending the cotton-stuffed barriers and then skydiving into the fortress. My son calls a brief truce to address my question.

I walk into the kitchen and open the freezer door to scan my frozen-food supply. I’ve been so busy with my biggest client’s new project lately that I haven’t had a chance to get fresh groceries this week.

“Ummm…fish, chicken, or hamburger,” I pronounce, staring at the stiff, frozen boxes.

“That’s what you always say.”

“That’s what I’ve always got.”

My son contemplates his choices pensively while preparing his monsters for their second wave of attack. “Chef Boy-R-Dee?” he asks.

“You had that last night.”

“I had Spaghetti-Os last night. I want Ravioli tonight.”

I consider his reasoning. It’s been a long day; I’d much rather lie down on my couch—even without its cushions—and read a book with my son than invent a creative chicken dish.

As I grab the can-opener, I hear the Red Power Ranger in the living room fall to his death from the cushion fortress. I can’t wait for my head to hit that cushion—less than five minutes according to the back of the can.

I never picked up cooking skills when I was a kid, even though I grew up with traditional parents. I had a stay-at-home mother who had dinner ready every night between five o’clock and five-thirty, which was the time my father arrived home after a long day at work. Now that I’m the mother, I don’t have enough time in my day to remember to take the chicken out of the freezer, much less to whip it into Chicken à la King. I’m a single mom, I work full time, and I want to play with my son when I get home from work, not cook.

Yet, I don’t want my son to suffer for my homemaking inadequacies. We had a turning point a couple of years ago that has encouraged me to find more time in my schedule to cook. At that time, the microwave was my most handy utensil in the kitchen. Every evening dinner was ready by six o’clock, announced by the repeated high-pitched beeping noise from the microwave. And there were no pots and pans to clean; oftentimes there were no dishes to wash if dinner came in its own self-serve tray.

One evening my son and I were expecting a guest for dinner, so I decided to spice up my menu a little by using the oven instead of the microwave. I painstakingly put together a seafood casserole with the requisite pound of butter and cloves of fresh garlic. There was mincing, slicing, and pre-heating involved. I was proud of my culinary undertaking.

With 20 minutes to go before the meal was to be taken out of the oven, I saw my dinner guest pull in the driveway. My son was in the living room, taking in a movie. The doorbell rang, and as I walked from the kitchen to answer it, I crossed paths with my son, who was marching past me toward the microwave oven.

The microwave is a thing of the past in my house since that Pavlovian night. Now I make sure I have enough time to use the stove for any dinner, including Chef-Boy-R-Dee. And I plan to get more elaborate with my cooking someday soon, like learning how to use all the spices that came free with my spice rack. Occasionally I’ve paid visits to epicurious.com to figure out what to use cumin or rosemary for, and once I even printed out a recipe from their “Quick Meals” section. Maybe I’ll actually cook it someday soon.

There’s a balance somewhere between well-seasoned filet mignon and frozen TV dinners, and I’m certain that time is the weight tipping the scales toward the latter in my household. If only I could fit in grocery shopping and recipe clipping in between lunch with clients, office meetings, and e-mails, then I’d be better prepared to answer the perpetual evening question that now causes me to lose my appetite: “What have you got for dinner tonight?”