What a Long, Strange, Trip it Was 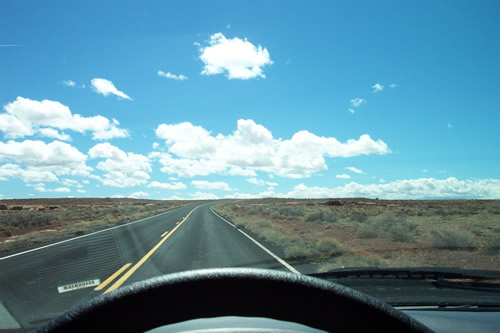 The invitation to my cousin’s bar mitzvah in Arizona seemed like the perfect excuse for a vacation. I convinced my husband to make a big trip of it — two weeks!

Two weeks of adventure and exploring! Two weeks without washing dishes! A chance to explore the beauty of the southwest with my family — a dream come true!

Except that as the trip approached, I was thinking maybe it was going to be more like a nightmare. Two weeks away from comfort and structure of home? Two weeks of 24/7 family time?

There was no turning back though. I called a few girlfriends for reassurance and proceeded to pack. Next thing I knew (perhaps the memories have been repressed) we were in sunny Phoenix.

Driving to my uncle’s house we passed the intersection of Tranquil Trail and Bloody Basin. The wrong turn could be ugly. Well, there were some wrong turns and it did get ugly because my husband, Ted, had taken great pains to borrow a GPS system. He thought it was the greatest thing since sliced bread, but I couldn’t find my way out of a breadbox with this high-tech gizmo.

That odd intersection was in the town of Carefree, which is also home to the crossroads of Ho and Hum. In addition to having the World’s Wittiest Street Names, it also hosts the World’s Largest Sundial. We arrived at the sundial on an overcast day only to find that the boys were much more interested in the World’s Smallest Playlot located adjacent to the dial. In fact, it consisted solely of a Gila Monster Slide. Regardless, they had a blast sliding for over 30 minutes.

After a weekend full of extended family activities we escaped up north to Flagstaff.

Because we planned to stay several days in Flagstaff we decided that it would be helpful, crucial even, to stay in a suite with a solid wall and a locking door in between us and our adorable children. The Hampton Inn and Suites was perfect. Those folks made us feel welcome even when we showed up a day earlier than they expected (my bad, but they were very accommodating).

Downtown Historic Flagstaff features many independent galleries and shops, or “Trading Posts” as they like to call them. Our favorite was the Painted Desert Trading Company. Sam was not only taken with their offerings of fine, handcrafted jewelry produced by Native Americans, but he was amazed at the high prices. This led to a long, involved discussion with the store’s buyer, Anthony. On all subsequent visits to town Sam insisted on visiting Anthony. Not only that, Sam plans to return to the store to work when he’s 18.

Meteor Crater: the isolated drive out to this 48,000 year-old hole in the ground in the middle of nowhere was refreshingly void of, well, anything — just open road and Big Sky. We were all but blown away (literally) by the gale force winds at the crater site. The weather prevented us from touring the crater rim, but we did enjoy the place. Fortunately the folks who put in the gift shop thought to also build a museum. Not only did we have the chance to purchase t-shirts, crystals and key chains, but we also learned about the history of the crater as well as meteors and asteroids and other floating space junk.

Waptuki National Monument: Waptuki is located on a scenic loop with Sunset Crater Volcano National Monument (another must see). The 18-mile drive features overlooks of the Painted Desert. The boys were expecting Technicolor, but Ted and I appreciated the subdued beauty. The park offers several sites of ancient pueblo dwellings which captivated me, but not the rest of my family. There were only a handful of visitors at the park and we had a good vantage point so we let the boys run ahead on the path. I amusedly watched them from above as they madly ran around inside a low-walled circular structure. “How cute,” I thought as I snapped pictures of them. I was horrified when I approached
the spot and saw a sign at the entrance to the circular room:

Sacred Site. Do Not Enter.

Back in the car the boys clearly still had an abundance of energy. Realizing were on a rarely traveled road in the middle of nowhere, we pulled over and let the boys out instructing them to scream at the top of their lungs. They screamed and yelled until we saw another car approach.

Grand Canyon: prior to our visit I came across Judy Allen’s essay, Coming of Age at the Grand Canyon, at Literary Mama and was relieved to learn that I was not alone in my fear that my children might fall into this gigantic hole.

We ventured out on the Bright Angel Trail, figuring we might be able to go about half a mile and still comfortable make our train. It had drizzled on and off throughout the day so the path was muddy and slick. Plus, this is the path that the mules take down to the bottom of the canyon, and they left behind several “presents” to mark their route. We had gone maybe 300 yards when the boys got into a tussle over who should lead. As I saw it they had about three feet between them and the edge with its severe 5-story drop. From Ted’s more conservative viewpoint, they were about three inches from the edge. Bloody Basin, indeed! He officially ended the hike. One stubborn child refused to budge. For a minute it appeared he might be sleeping on the trail that night, but eventually we all sulked back.

Sedona: I was expecting a really beautiful version of funky college-town Madison, Wisconsin with leftover hippies communing around Sedona’s natural energy channels or vortices, but instead found a tourist trap. A hundred stores all selling the same crap albeit set against a fabulous background.

We went on two jeep tours both of which took us on graded roads that would have been too bumpy for our rental car. We got great mountain views and good photo ops. Our first tour courtesy of Safari Jeep was led by a naturalist. It was interesting to us, but Eli fell asleep on our sunset drive. Sam seemed like he was dozing off, but surprised us two days later by writing detailed notes in his journal quoting our guide verbatim. Two critters (tarantula and a snake) came along for the ride and Sam enjoyed meeting them face-to-face.

Our other tour, the “cowboy” tour, was led by a real-life cowboy whose politically incorrect commentary was refreshingly, if not shockingly, honest…or offensive, depending upon one’s point of view.

During our two weeks of driving around the state the most grating question was not the kids inquiring, “are we there yet?” but Ted whining- “is it over yet?” Two intense weeks of family time had its moments. But we enjoyed unique experiences and created great memories all while managing to avoid that dreaded Bloody Basin.