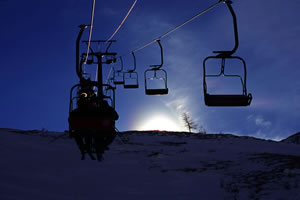 Everything was fine until Susan screamed. Lightning snapped overhead, overshadowed instantly by the crack of thunder. Ahead of me on a two-person chair lift, forty feet above the ground, my daughters cringed as the storm lashed around them. Six-year-old Susan’s wail of terror floated over the noise of the storm, enough to send a chill down my spine.

Song Mountain was a shabby, third-rate ski area that eked out tiny profits from local Syracuse skiers in winter and tourists eager to catapult down the 3,100-foot alpine slide in summer. On this day in late June, it was the target of a malevolent storm that had blown up out of clear skies during our twenty-minute ascent to the mountain’s peak.

Wind gusts set the lift chairs to swinging crazily. Someone, probably the teenage worker in the control house at the bottom of the slope, had stopped the forward progress of the chair lift, leaving twenty-eight of us stranded forty feet above the ground in the electricity-charged air. I was oblivious to all but two of those people; my energy focused on my children an unbridgeable thirty feet ahead of me. With each lightning flash I tensed, expecting them to be incinerated before my eyes.

Stopping at the Song Mountain alpine slide on the way to vacation with my parents in the Thousand Islands had become a family ritual. Originally it was simply a convenient place for the kids to let off steam during the long drive from New Jersey to Canada. Over the years, it had evolved into a much-anticipated adventure in our annual vacation.

This day, for the first time ever, Susan had chosen to ride the chair lift with her eleven-year-old sister, Helen, rather than sitting securely next to me. Now, in clear view, but completely beyond my reach, my children sat exposed to the storm’s full fury. I watched hopelessly as the lightning played along the ski run.

“Mommy…. Mommeee.” Her voice trailed into an unintelligible howl of panic as fierce, frigid bursts of rain assaulted our faces. Trying to cover Susan’s body with her own, Helen succeeded only in making the chair swing more violently.

A rage of helplessness washed over me, obliterating any fear I might have felt for myself. My maternal instincts screamed the need to protect my children. Had there been water, fire, or guns separating us, I would have raced to them, heedless of the danger. Instead, the emptiness of the air between us mocked my passion to make them safe.

A lifetime passed until a white pick-up truck snaked its way up the muddy ski run. A man in a flannel shirt emerged from it and, seemingly oblivious to the storm, climbed on to a maintenance platform one hundred yards up the slope from where we hung.

The chairs began to jerk forward. My children and I moved in tandem, the distance between us never narrowing. Then in a flash of clarity, I saw that the thirty feet of cable and between us was the tightrope every mother walks, performing a balancing act between protecting the babies that were once a part of her flesh, and giving them up to the world to spread their wings and grow into independent, resourceful individuals.

The air separating us was just the beginning of a distance that could never be recovered. Time and maturity will move these children away from my protection, still in sight, but traveling before me into a wider world where I have no magical maternal powers to keep harm at bay. Yet the love, the instinct to protect, and the willingness to sacrifice myself for them will always remain, along with liabilities of failing to spare them pain and fear. As we moved forward, for the first time I saw my daughters whole and separate from myself across the unbridgeable gap of a generation.

They are a fragile hope moving forward beyond my reach. I can watch, but I cannot intervene. They must fly and stumble, love and hate, weep and exalt and learn for themselves the same truths that I had to learn for myself while my mother watched. My love is not enough to save them. They can be in my sight and in my heart, but still beyond my help.

“Jump,” the man on the platform yelled as the kids’ chair stuttered four feet above its slippery wooden planks. “One! Two! Three! Jump!”

They jumped and rolled away from the moving chairs as I burst into tears.