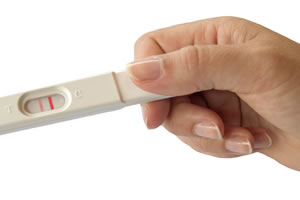 It was the proverbial 400-pound gorilla and it followed us everywhere. It was with us when we went out for Spring Break where we realized that we had become the creepy old people hanging out in the corner of the room wondering why the music had to up so loud. It was with us when we went to my cousin’s kid’s christening – their fourth! This was the same cousin who had married only two weeks before us. Again, it was there when we went to the mall and were attacked by an over zealous salesman who wanted to know if we would be interested in purchasing retirement property up north.

Now don’t get me wrong, it wasn’t that we weren’t planning on having a baby. We had discussed it…dismissed it…discussed it again…ran far away from it…hid from it…but everywhere we turned it was still there lurking around every happy meal, park playground, and anticipatory look from the grandparents-to-be. So we decided that maybe, perhaps, quite probably it was time to start a family.

Figuring that it would take us years of trying, we had plenty of time to put things off and still be the free wheeling adults we had become. Our friends were caught in the quandary of trying, and trying, and trying to have kids so we’d figure that we’d have at least a year before “IT” happened. Little did we know, EVERYTHING was about to change — and oh, how soon it would be.

Most of the couples we knew were spending a long time and a lot of money on trying to conceive a child. We on the other hand, were trying to have a baby merely to move on because it was the “next stage”. No debt, check. Sports car, check. Fancy vacations, late nights, and sexual experiences in oddly romantic places? Check, check, and check again. We went at conception with all the excitement of receiving the “You could be the next $10 Million Dollar Winner” catalog in the mail – fun for a moment to think about what might be, but then moving on because there was NO way it was ever going to happen. Not us, no way, nuh huh, no how. Then only the very next week after she stopped the pill “IT” happened.

Understand that there are certain things that happen in our house once a month, every month. We whine about the cable bill being so high, we add the new magazines to the Leaning Tower of Pisa (a.k.a. our stack of unread magazines which are piled perilously on the coffee table waiting for just the right seismic disturbance to come crashing down all over the floor) and my trip to the store in search of double stuff Oreos because my wife goes through…well you know. It’s what most women go through once a month…YOU KNOW… that thing.

These are the pillars of which we live our lives, they are as certain as night, day and taxes. However when one of those things doesn’t happen, specifically the last one, it is cause for alarm. The birth control pills made all of my wife’s plumbing work like a clock — scientists actually set the atomic clock to my wife’s body. Then the first day went by with nothing. We dismissed it. “Hmmm, must be an extra day this month.” The second day went by, “Um…must be stress”….then the third day, the fourth day, the fifth day. We began each morning not with a gentle kiss on the cheek, nor did we awaken to the soft whisper tones of a perfectly cooed “I love you”, but rather we’d roll over and half stammering with just the slightest sense of fear in voice, I’d ask, “Is it today?” To which my wife would reply, “No…um….not today.” After ten glorious days of these exchanges we decided to go to the store and buy – the test.

I doubt there was anything I have ever had to purchase in my life that was more intimidating than the pregnancy test. Not buying a car, not buying a house, not even the time my buddies voted me to sneak into the seedy side of town to buy a stash of porno magazines, was as intimidating as purchasing that blasted little stick, and I didn’t have to do any of the work involved. (How woman manage to get that thing just right without peeing all over themselves is beyond me. Guys, we just “ready, aim, and fire”, very easy. Woman you have two fun choices to make, either “squat, hover, and aim” or “lift a leg up – and stick your hand down”. A guy could never do this and if we tried there would be gratuitous injuries, how-to manuals spread across the bathroom, a mirror on the floor, and we’d end up peeing all over everything – except the stick.) So there we were in the feminine products aisle, which is always a lovely place for any guy to spend their leisure time to begin with, staring at the ten million different products all of which were designed to tell us if life as we knew it had ended.

There were dots, dashes, slashes, crosses, double lines, single lines and squiggly marks. My personal favorite was the “Teen Idol” home pregnancy kit. This particular package included a bonus MP3 player and a packet of fill-in-the-blank GED & State-Aid forms. My wife and I opted for the test with the readable digital display. Seemed easy enough, we could both read and we wouldn’t have to figure out the hieroglyphics of the other ones. The package promised to be the “Safest & Easiest to use.” the display would spit out one answer or the other “PREGNANT” or “NOT PREGNANT”. It promised to be 99.97% accurate. Now a 3 in 10,000 chance failure rate may have been good enough for most, but not us – we bought the twin pack, just to make sure.

So there we were – her in the bathroom, and I waiting anxiously outside the hall. Seemingly an eternity had passed when I heard the door creak and watched for my wife. I had decided to pattern my reaction after my wife’s –if she was over excited I would be over excited, if she was sobbing tears I’d cry as if someone had scratched our car. I slowly looked up at my wife to see she wasn’t sad, and she certainly wasn’t too happy, she looked – rather pissed off (pardon the pun). She was flailing the stick up and down as if she was trying to clear out an Etch-A-Sketch.

“What does that mean?” I asked. “The package says only two readouts, one or the other- nothing about a third option? Is there a decoder ring or something in there? What do the directions say? Didn’t you follow the directions?”

The look she shot me made me realize the great irony of me asking about following directions. A once in the lifetime moment for sure, but some things are worth reading all three languages on the mini folded pamphlet. After a thorough reexamination of the package apparently there was a delayed wait time on the readout. We stared at that stick with all the concentration of Superman’s x-ray vision. After a few minutes the stick now clearly stated “PREGNANT”. In all of my preparedness I said the most appropriate and reassuring thing I could come up with, “How long do we wait until the ‘NOT’ shows up?”

It was then that we realized that there wasn’t a “NOT” coming from our new digital friend. At that moment a flash of the horrible fear and uncontrollable excitement overcame us. Still we didn’t want to trust the test, after all there were those 3 out of 10,000 defective ones, and the next day we tried again. Alas we were indeed still pregnant. We knew nothing about babies, and certainly weren’t ready for one to join our party. However as the read out said “IT” was happening and there was no going back. Just like that our two had become three…or four…or OH GOD NOT FIVE…what if it were SIX!! (Would having quadruplets be enough to get us onto one of those Oprah giveaway shows? If it did then six wouldn’t be all that bad. Maybe I could get a new TV out of the deal? What’s the minimum litter size for these things?)

Only time will tell us for sure what exactly we’d gotten ourselves into. It should be easy though right? I mean we do still have nine months to figure it all out…