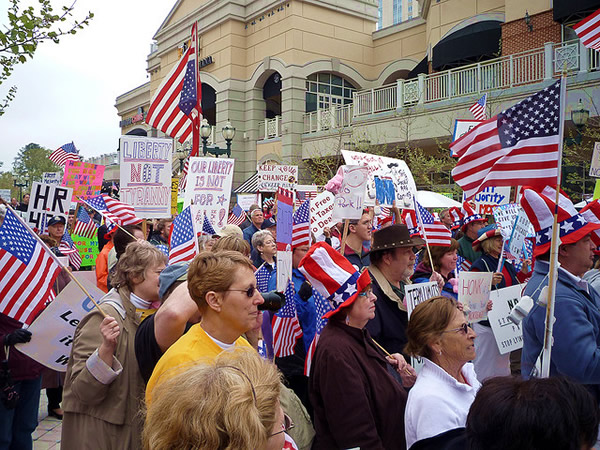 The Tea Party is like the Ku Klux Klan “without the robes.”

This is what Rep. Steve Cohen from Tennessee had to say about this “grass roots” organization, which had such a significant effect on recent elections. I don’t think anyone would dispute that the Tea Party, such that it is, has developed a voice for itself in our political discourse, so making a reference like that is more than just mildly disturbing, it is downright shocking to me. Really? The Klan? Is that the image that he meant to evoke, that of hooded White Supremacists with torches, terrifying people of color in the South?

I would argue that this type of reference is dangerous and definitely counterproductive. It puts up a barrier to social discourse, and we are nothing if not a nation that prides itself on its ability to discuss and reason in an intelligent way. Just ask the networks which air all the political commentary shows. But discourse is going to be difficult if this trend continues.

Another term that I have heard a lot lately is “segregation.” Now when I think of this, I think of Martin Luther King and Jim Crow Laws and Plessy v. Ferguson. I do not think of, say, a new charter school for children affected by Autism in Newark, NJ, yet that is how this proposed institution was described by opponents of it.

Using these words and phrases, with all of the connotations they bring to mind dramatically alters the discussion, detracts from whatever the original argument is. Is the intent to horrify us, the voting public, to remind us of a reprehensible time in our history so that we will reject a specific proposal, whatever it happens to be, so that we will not appear to be racist? Pro-Life groups try to make abortion a racist issue as well, by suggesting that most abortions occur in poor, urban areas where women of color are concentrated. Abortion will be the death of the Black race in America they warn.

When Governor Walker in Wisconsin says we will “bust“ them, meaning unions, by dismantling their collective bargaining rights, by “we” does he mean Republicans who are fundamentally opposed to unions in general? And by “them” is he referring to Democrats who traditionally champion such rights? Of course he is, so the divide widens.

Okay, so we’re not racist, but we do live in an “us” against “them” kind if society. This has been foisted upon us by the politicians who are constantly making us choose whose side we are on, unions vs. corporations, liberals vs. conservatives, pro-life vs. pro-choice. We are being asked to define ourselves and then align with a particular group that espouses that point of view. Susan Jacoby, writing in the LA Times writes, “Whether watching television news, consulting political blogs, or (more rarely) reading books, Americans today have become a people in search of validation for opinions that they already hold. This absence of curiosity about other points of view is the essence of anti-intellectualism and represents a major departure from the nation’s best cultural traditions.” It has gotten to the point where the idea of bipartisanship is viewed as an outdated and an even outlandish concept. The rallying cry, “we will not compromise!” is the applause-worthy refrain heard today.

Those who suggest we find common ground and work together to forge bonds are drowned out or mocked as being naïve and ultimately ineffective as they find themselves isolated in today’s political atmosphere. Even congressional district lines are drawn and constantly changed to separate groups by political party, color coded as red or blue. There is no purple district, no purple state. The issues that continue to divide us are referred to as “wedge” issues. The middle ground may be the goal, attaining it a means to an end, the end being compromise as a way of solving problems, but too often today the end goal is election, or re-election, so segregation is indeed a means to an end—divide and conquer.

I say don’t let them get away with this. I think we should publicly call out politicians and groups who use this kind of language to make their points, to bring people around to their point of view. I feel as if they are almost trying to break our collective spirit by encouraging us to turn on one another.

While I think we can all agree that separate is not equal in most cases, we sure do like to separate ourselves from the opposition these days when it comes to politics. No matter how open-minded we feel ourselves to be, if we insulate ourselves from the opposing viewpoint we re-enforce our own extreme views. However, it has been shown that over time, if people integrate, ideologies tend to become less extreme and more emulsified. That is a good thing, no matter what political party you belong to.

United we stand. United we prosper.