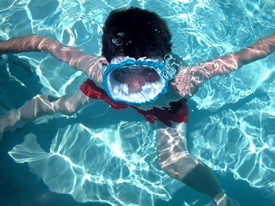 Sitting through my child’s swimming classes was among the most heart-wrenching tasks of motherhood to date. Actually, years ago when his private instructor was a buff 22 year-old it wasn’t difficult to keep a close eye on him during lessons. However, when we signed up for group lessons through the park district it was a different story.

Although the student/teacher ratio was excellent -— often less than 4:1 — nearly two dozen students were taught simultaneously in the large indoor pool. And not all of these soon-to-be-swimmers were happy campers.

Were it not for the overwhelming smell of chlorine I could easily have closed my eyes and imagined myself inside a (insert name of underdeveloped country here) orphanage. Echoing off the bare walls one heard a tremendous amount of crying, whining and moaning, much of it due to Sam, my 6-year-old.

Sam was a trooper. He hated his lessons, but endured them. He showed up whimpering and sometimes had to be all but forced over to his teachers, but he did not quit. Although his small, bony frame was rigid with cold and fear he worked hard to hold back his tears and please his teacher. Everyday after class we celebrated his perseverance, his success. We consumed a record-setting amount of junk food and added many cards to his Yu-Gi-Oh collection in the name of positive reinforcement.

For nearly two weeks we repeated the drill. I coached and encouraged him (You’re getting better every day!) I questioned him (What’s making you scared? How can I help you?) I reassured him (Your teacher will not let you drown!). I met him with his favorite towel as soon as he exited the pool.

But his behavior did not change.

The big problem, he finally confessed, was that they made him “bob.” They’d dunk his head underwater regardless of how he felt about it. I know that many swimming instructors take such a “tough love” stance. That I cannot bring myself to dunk my children against their protest is probably a good thing in many regards. Still, I believed in the teachers and their methods.

Up in the viewing stands I anxiously watched my shivering, scared boy. “He’s six. He needs to feel confident putting his face in the water,” I reasoned to myself. But I had nagging doubts. “He’s six. He will remember this. Twenty years from now he will be telling his therapist about swim class. I am an unfeeling and controlling mother. I will die alone and unloved because I forced him to complete this class.”

Two days shy of the last class Sam developed an outer ear infection. This was just the opportunity we had been waiting for. I told his teacher that he was not allowed to bob for the remainder of the session, doctor’s orders. The pediatrician had actually given him the okay to go under, but my “inner doctor” said otherwise. Perhaps my inner doctor is a psychiatrist.

The transformation was amazing. Once the pressure to bob or be bobbed was removed, he actually enjoyed the lessons. He smiled, he showed off. “Look what I can do!” he called out to everyone in the pool. “Mom!” He proudly shouted up to me, “Did you see that?”

His body had relaxed; he seemed eager to try new things. My gosh, he laughed. As he splashed about on the kickboard below, I kicked myself for not having put my foot down with the instructors. I understand their philosophy, yet I understand my child. When held under a tight rein, he resists, but left to his own devices he often progresses by leaps and bounds. Perhaps I should have been a stronger advocate for him. Maybe I had failed him.

The day after he finished lessons the weather had finally warmed to enough to go to the pool. Thankfully, the boy who cried every day before, during and after swimming lessons for nearly two weeks had reverted to his old, water-loving self. And then some.

“Mom, look!” He demanded. I watched, flabbergasted, as Sam dunked himself, repeatedly, for up to ten seconds at a time. Each time he surfaced with a broad grin. “Mom!” He shouted excitedly, “I was underwater for over a minute if you add up all the seconds from each bob!” Wow, I guess he learned something after all. And I’m pretty sure he still loves me.