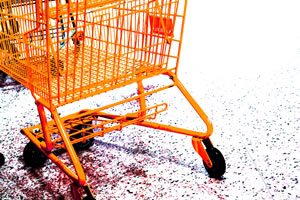 Everyone was right. My kids did deserve to grow up with a mother who was happy. And I was. I was happy with my wonderful kids and my circle of French-manicured girlfriends, latte clutches, wine times and PTO. Who wouldn’t be? Our newly decorated four-bedroom Tudor was tucked neatly into an old oak tree lined street with a sidewalk dotted with basketball courts and Little Tikes. Our town had a quaint little downtown area lined with awning shaded benches, streets perfect for strolling, eating ice cream cones and visiting with friends and neighbors. It was diverse enough to not be Stepford-like, but adorable nonetheless, and ranked as one of America’s best places to live. At last, for us, it was only the best.

After years of low-paying medical internships, residency and fellowships, our bank account finally boasted a balance high enough to pay all the bills every month. We were able to save money, pay off $125K in student loans and live in a modest lap of luxury with two new cars, a staple of golf clubs, bicycles, sports equipment and tools in the garage. I’d lost the 30 pounds I’d been carrying around since my son Thomas was born and after ten years it felt good to tuck in a shirt again, even wear something sleeveless, and buy clothes at my whim. The kids were able to keep up and excel. My daugher Elizabeth took ballet and tennis and had friends within shouting distance. Her seven-year-old spirit soared when she learned to jump off the diving board at the country club. Thomas’ passion for basketball escalated with our season tickets.

Our Saturday nights out in the city were elaborate. Trendy, high-priced restaurants, bottles of wine, everyone dressed in their designer finest. The laughter amongst the crowd of friends, all successful, all living in our world, was boisterous and heartfelt.

Life was almost everything we had dreamt of since I’d met Charles as a college freshmen on that long ago and far away cold January night nineteen years before. He was studying biology and I was the friend of a friend, studying English. I remember the first time I saw him, sitting on that dorm bed, against the wall, me leaning on the door jam surrounded by chattering sorority sisters. He was clean-shaved, a little preppy, and nonchalant. Very collegiate and suburban, unlike the urban boyfriends of my short social past who built their own cars and wore Wallabees and flannel shirts, but even more in contrast to my 80s big hair, frosted make-up and tight jeans. It was five months later when we would meet again on our first, somewhat arranged date, our fate being sealed over a salad bar dinner in Old Town and underage drinking at a college pub.

This was the time when our reality was laced with dreams, dreams that were now coming true. All the struggles and striving were supposed to make it all that much sweeter, but instead, it was growing rancid before our eyes.

Yes, while my children were growing up with a great life, I was subsisting in a rotting marriage. A trip to the grocery store was a treat, and that’s when you know you’re in big trouble. While pushing a half-full shopping cart and straddling the frozen food and chip aisle, I was contemplating nothing more cumbersome than whether to buy fat free or sugar free ice cream. Out of nowhere, I realized something.

It wasn’t a matter of happiness. After all, I was happy in many ways. But what struck me there and then, was that my kids deserved to grow up not only with a mother who was happy, but one who could respect herself. And that was in jeopardy. If I continued allowing Charles to pretend to work on the marriage, fake his way through marriage counseling, continue his affair with Tiffany, and take his time deciding if he wanted to be married, all while living in the facade of a happy home life, at some point, self-respect was no longer going to be an option.

I was allowing myself, amidst the credit cards, hospital balls, and convertibles, to be treated like someone worthy of little more than a cheap disguise could hide. All this would eventually result in my children growing up with a mother who couldn’t bear to look at herself in the mirror.