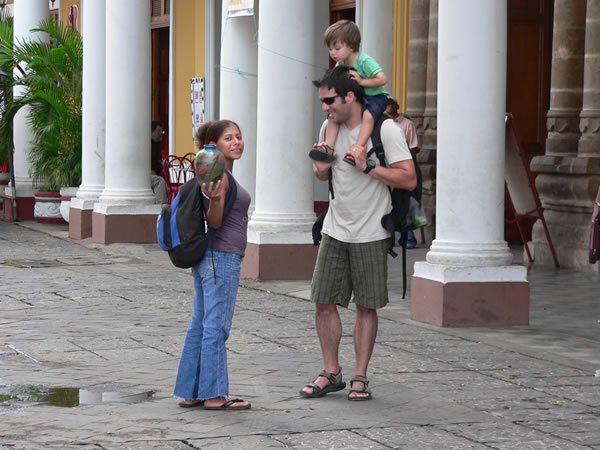 It’s with no small amount of guilt that I shoo away a kid of about 8 who approaches me with a, “Hello, amigo.” Enzo doesn’t notice. We’re sitting on the front steps of our hotel, me poring over the map of Granada and him captivated by the horse-drawn carriages that line the central square of this well-preserved Spanish colonial town.

Street kids—whether the pint-sized kitsch hawkers at Angkor Wat, the frequently belligerent Gypsy girls outside the Louvre, or the pack of 9-year-old boys who follow you Pied Piper-style to the bakery in Hue (where you inevitably buy them a loaf of bread)—are a fixture in the life of a traveler. Almost anywhere you go, there’s a predictable culture of children working tourists on the streets.

Even more so once you’re traveling with your own child.

Before I can shoo him away again, the Granadan street kid is playing hide-and-seek with Enzo, who’s howling with delight at having found someone closer to his size to play with. Every now and again, this grubby 8-year-old pops up from behind a planter and yells, “Estoy aqui!” which sends my 2-year-old screaming and scampering in that direction.

The next morning, as we head for breakfast, Enzo calls out, “Estoy aqui!” at random intervals—his first words in a foreign language.

At the local waffle house, we tear through the staggering platefuls of food when the first of the street kids appears, throwing us a forlorn, “You gonna eat that toast?” look. In fact, we’re not going to eat the toast, so I reach down to the street and hand it off to him. At which point the manager shouts and chases the kid away. It’s a game of cat and mouse that will play out again and again while we sit here, the manager now paying particular attention to my side of the cafe since I’ve proven myself to be an easy mark. Of course, the manager won’t correct or scold me. I’m a paying customer, after all. But he’ll throw me a disapproving look and keep a better eye on my side of the patio. The last thing he needs is for packs of kids to run off his clientele.

And you can’t really blame the guy. The family from Richmond sitting behind us definitely doesn’t want some skinny, unwashed child asking them for a strip of bacon. This isn’t the holiday they signed up for. People get mad when poverty is waved in their face; it’s full of messy feelings of guilt, helplessness, self-doubt and the knowledge that there but for the randomness of the birth lottery go you. And—honestly—who wants to deal with any of that over waffles and coffee?

Enzo, of course, is dealing with nothing but the conundrum of how to get the chocolate chips out of his pancakes without having to actually eat the pancake.

He isn’t old enough to ask why he has piles of food—most of which he won’t eat—and that another little boy gets yelled at for having my toast. He isn’t old enough to wonder aloud why this potential hide-and-seek partner can’t come have breakfast with us. He isn’t aware enough yet to ask all the obvious questions we’ll spend the rest of the meal ignoring. And I’m relieved. Because when he does, I have no idea what I’ll say.