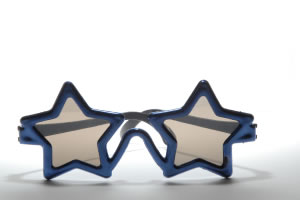 The chubby, naked baby on our last Christmas card is the cutest damn thing you’ll ever see. I’m not just saying this because I’m the chubby, naked baby’s father, either — my wife’s talent agency agrees. The woman who books her on voice-over jobs called immediately after she saw the card. “Jenny, your baby has got to be at a photo shoot for these adorable baby clothes in two days!” But Jenny was out the door to catch a flight, so I would have to take our eight-month-old son to his first day of work.

My sister asked, “Are you nervous?” Why should I be nervous? Britt would be the one getting his picture taken, not me.

“Aren’t you worried about those stage parents? And what if he doesn’t perform?”

None of that had really crossed my mind. I thought most of the people would be like me and have a cute kid on a card they sent to their agent. And Britt usually laughs around other people; he only cries when it’s bedtime. However, I did see a TV show about six year olds in beauty pageants — the parents screamed at these little princesses until they finally agreed to live out their mother’s dream. I didn’t want my son to be around those people. Also, all of the lights and cameras might make him upset and tantrum uncontrollably. What if those baby beauty pageant parents give me that eye-roll people get on a plane when their screaming kid won’t shut up? Still, I was expecting something a little different.

The photo session was going to be held in a loft, and I could tell by the address, this is a hip and trendy part of Chicago. Also, I’ve seen enough Entourage episodes to know what a craft food service table looks like. I imagined as I entered the posh loft my son would be whisked away by a team of baby stylists and nannies. I would be guided, by an attractive young hostess named Holly, to a table filled with bagels, luncheon meats, condiments, pastries, cheeses, a carving station and a sundae bar. Holly would then carry my plate of chocolate éclairs and salami sandwiches to a tray aside a large couch where I would watch satellite TV until Britt’s five minutes of fame were up. The team caretakers would then bathe him and carry him down as soon as the valet returned with my freshly washed car. Yes, sometimes I shoot high, but I’ve never missed so badly.

The photography studio was on the outskirts of the “nice” area of this West Loop neighborhood. The loft shared the building with a couple of meat packing plants. Box trucks carrying all sorts of animal parts would barrel through a one-lane road meant for two-way traffic. I ended up parking two blocks away, and noticed there was no sidewalk. I carried Britt down that road, but it turned out to be one of those cool father and son moments. It was our first time being inches away from a truck doing 80 miles per hour. He seemed to enjoy it more than me.

Despite sharing a residence with a place that cuts up cows, the loft was very nice. The big, wide-open space with hardwood floor, granite counter tops and exposed brick was huge. It was also packed with photography equipment, sets, and a dozen people working on the shoot. However, there wasn’t a buffet style eatery filled with snacks and cakes. Instead, I found a box of doughnuts that had been pilfered through so only the plain ones were left. I looked at the naked pastries and thought, “Why do doughnut makers make the plain doughnut? Who wants to get all of the calories and fat that you’d get from a chocolate doughnut, but none of the flavor? Makes no sense to me.” But just before I could start yelling at the poor, plain doughnuts a woman snuck up behind me.

“Is this Britt?” she asked. I hoped I wasn’t thinking aloud, again.

I was led to a table to sign my child up for his first day of work. The sneaky lady explained the details. “OK, so he gets $75 per hour. Then, if the client likes him they will be used at point of purchase, internet and print. You get $350 for the three year license.”

That sounded fine to me, “You mean I’ll get 350 bucks every place they use his picture?” I asked.

“No, no!” she quickly corrected me. “He’ll get $350 just once, and they can use it as many times as they want for the next three years.” This hardly sounds fair, but he isn’t union so we can’t complain to anyone.

We took a seat in the dressing area while a team discussed his wardrobe. “Let’s put him in the underwear,” someone said. I thought having him in underpants when he still craps in his current pants might look strange, but these are advertising and photography professionals, I’m just an amateur stage dad. “Wait, he’s probably still in diapers,” a voice of reason sounded. The group huddled over the clothing rack trying to make a decision.

Finally, a woman in a black executive type suit asked me, “Is he walking yet?” I looked at Britt, and I saw that he almost laughed at the question too.

“Well, he just started crawling yesterday so I think walking might be a few days away.”

Britt seemed particularly amused by the green doggies that were on the blue pajamas they gave us. As I zipped him into the one piece outfit a woman started brushing powdered makeup on his cheeks then sprayed hair spray into her hand and smoothed down some of the fly-aways on the top of his head. Everything seemed to be coming together for the big shoot, but then Matthew couldn’t get his act together.

When we walked into the loft I glanced at a list and saw kids of all ages would be filtered in and out through out the day. A three-year-old boy named Matthew was on the set, and Britt would be next. Getting Britt ready I could see the strobe of the flash pop every couple of seconds and listened to the commotion that was coming from the photography area. “Over here, Matthew! Right here! Hey, Matthew! Look over here!” This went on for about a half hour.

I wanted jump in and say, “Look, Matthew either get with the program or start crying really hard so we can all get on with our day. Either way, you’re getting a Happy Meal out of all this.” Instead I sat there and waited, and became nervous this would happen with my baby.

My hands started to become clammy as I thought about Britt pulling a Matthew when a stage grandmother said to me, “You don’t see many daddies at these.” She said it in baby talk, so I assumed she was talking to Britt. Since he can’t speak yet, I answered for him.

“Yeah, not many guys here,” I offered.

She had come with her daughter and a beautiful 3-month-old granddaughter. Granny asked, “Is this your first booking?” This time in her grown up voice, so I knew she was addressing me. I wanted to answer like a smart ass and say something like, “Yes, this is his first. I’ve been booked a few times. Mainly for petty larceny, but once for grand theft.” Instead I just nodded my head, but it made me even more anxious being surrounded by people who knew the baby-modeling lingo. I began wiping my sweaty hands on Britt’s new PJs when another grandmotherly woman said, “It’s Britt’s turn!”

My son was couldn’t have been happier to be ripped from his father’s arms by a complete stranger. Four moveable walls made up the set. The photographer’s gigantic camera was at one end mounted on a tall, thick pole so she could move it up and down to capture different angles and get a steady shot. There was only one light, and it wasn’t that hot or bright. The inside of the makeshift room was stark white with an ottoman covered by a piece of thick, white shag rug sitting in the center. The baby handler put Britt down on the ottoman and began a strange song and dance routine.

I was told to stand where Britt couldn’t see me, because if babies see their parents they’ll get anxious to be with them, but I would be surprised if the boy could take his eyes off the 60-year-old woman singing a SpongeBob song while hitting herself in the head with a squeaky mallet. However, after only a few minutes of her antics Britt was uninterested. “Can we get dad in here?” I heard the photographer ask. Something was wrong. My hands began flop sweating again.

Thankfully, Britt was not acting like Matthew, but he had become bored with the process. The last time he acted like this we were at a restaurant, and I took a menu and began fanning his face. He was giggling so much people thought we were sneaking him booze. I spotted a legal pad by the photographer and gave it to the babyhandler. “Wave this in his face,” I said and handed her the legal pad, and walked out. A few seconds later, he was laughing and smiling.

“I wish they all could be as good as him,” the photographer told me as my baby was returned to me just a few minutes later. As I put his street clothes back on I was thinking about when I was going to tell him about our adventure. Maybe the first time will be on his 5th birthday. Then again when he turns ten. On the day he graduates high school and college, too. Walking back to the car, as he giggled as a truck carrying slabs of meat missed us by inches, I thought about his wedding day and how I could weave this into the speech I’ll give.

I’d thank the bride’s family for such a lavish reception, and give praise to the minister for a lovely ceremony. I’d welcome Holly (a different one) to the family and say how her family is now our family. I’d then launch into Britt’s first job and how perfect he was. How I had never been so proud of someone so small, and how wonderful of a feeling that was. We’d drink and dance the night away, then Britt and Holly would be off to their honeymoon in Hawaii. But it might not happen like that. He could get married in a unification ceremony on a tree stump in the middle of Vermont to Bruce and they’d honeymoon at Fire Island. Either way, I’m telling the story of the stage dad and his son.