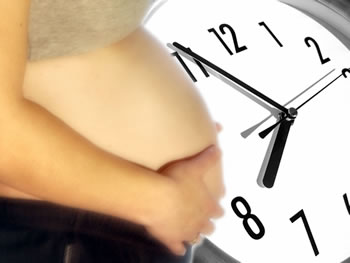 My first labor was long, painful and augmented with Pitocen — what I affectionately call “the Devil drug”.

So I swore it would be different the second time.

When people asked me how long I was going to continue working through the pregnancy, I told them, “My due date is July 3. My last day at work is July 2.”

When quizzed about when Hubby and I would be zooming off to the hospital at breakneck speed, I would reply, “Not until I see either a head or a foot.”

I was only half-joking. I had no desire to lie in a hospital bed for hours and hours, begging for drugs, with labor-stimulating medication coursing through my veins and making my uterus feel like a tsunami. “This time,” I promised myself, “it will be different.”

I walked daily. I ate healthy foods. I did tons of squats and pelvic tilts. I gathered “portable” food and stuffed it into not one, but two hospital suitcases so that my husband would not starve during what I apprehensively assumed would be another very, very long labor. Sure, I was wishing for an easier time this go-round, but one can never be too careful. I even wrote out a birth plan. They’re all the rage among pregnant mothers right now. I sat down, stared at the blank piece of paper, and after a few minutes of thought wrote “EPIDURAL” across the top in huge block letters. I honestly couldn’t think of anything else to say.

I instructed Hubby to take July 2 off from work, as it would probably be his last chance to sleep in. It would also blend in beautifully with the long July Fourth weekend. Since it was my last day of work before maternity leave, Hubby would get a nice long day all to himself. Oh, yes — I had it all planned, down to the last detail.

Psyche! Mother Nature just loves to laugh at us super-planners. I awoke at 5:30 AM the morning of July 2 to find I was in labor. And what a peaceful labor it was! The contractions were strong, but not really what I would call painful. I breathed through them for hours, doing what I very un-modestly figured was a beautiful job. At 9:30 I awoke Dave, my husband, and asked him if he would mind taking me to my 40-week checkup, as I believed I was in labor. I figured I must be at least four centimeters dilated by then. He was very excited. We got into the car and off we went.

“How much?” we asked excitedly.

Well, blow me down.

We raced to the hospital, Dave and I, talking and joking the whole way. We wandered down the hall to the Maternity Ward to the shocked looks of bustling nurses who had been alerted by my doctor of our pending arrival. Questions were thrown at me while Dave was spirited off to sign me in. I was hooked up to a fetal monitor. Everything was going according to plan — in fact, even better.

I had done it! I had licked this thing. I had beaten the system. I was having “The Perfect Labor”.

Then the pushing stage began.

PAIN. PAIN. From out of nowhere. I screamed and began begging for drugs.

“Give me something,” I pleaded, like a junkie twelve hours after her last fix. “Please.”

Damn my plan, anyway. It was backfiring on me. But at least I was having the fast labor that I’d wished for — the labor every expectant mother dreams of: fast, fast, fast. It was, well, perfect.

Or not. My pushing stage lasted eight minutes. That’s right – only eight minutes. And in the process of those short eight minutes, my sweet 9-lb., 1-oz. baby boy separated my pelvis. Just tore the cartilage right open. As my doctor later said, “I’ve seen pelvic separations before, but never one this wide.” Ah. Lovely.

I went home with a pelvic brace and a walker. I could not climb stairs. I had to carry my baby in a Snugli because both hands were braced on the walker at all times. I couldn’t lie down for five weeks, so I had to sleep — sort of — sitting up in a chair.

It was all worth it when I looked at my beautiful baby’s face. How I love that boy. He’s worth ten broken pelvises (is that even possible?). But I think I’ve learned my lesson about fast deliveries. Next time I’ll go to the hospital at the first twinge so I can begin my Epidural begging early. Maybe I’ll order one up for my husband too, just to be nice. I just don’t think he can make it through another labor like my last one without a little something to take the edge off. That poor man was white as a sheet.

So it’s a completely different plan this time…though I really should know better by now than to plan anything. That Mother Nature is such a kidder.