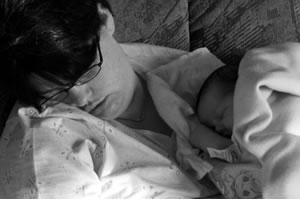 I decided last week that I was going to beat my kids to my energy. I was tired of dragging ass by 3 p.m. and I wanted a change. So I set out on a mission to learn the tips and techniques used by the "professional parents" to stay full of energy, stamina and vigor all day long. After much research, I learned that in order to conquer this quest I would simply have to change a few things, make minor alterations to my day and be disciplined enough to follow through. It sounded reasonable enough. The goal became a 3-parter:

In order to optimize my day, it became clear to me that I needed a full night of rest. The suggestion was to get a minimum of 8 hours of uninterrupted sleep a night. Who were these people trying to kid? Anyway, I tossed aside the skepticism and decided to dive in. This worked for about 2 hours and 14 minutes.

The first night, I put the kids to bed at 8:00, told my husband he was in charge and settled in for a great night of sleep. As I lay there I tried with all my might to close my eyes and it became impossible. I just knew I was missing American Idol and I was not prepared for that. What if Taylor gets eliminated? Is Paris Bennett the next American Idol? Is Paula going to be stoned out of her mind? How am I supposed to sleep with all these unanswered questions?

When I finally began to doze off (the last time I checked the clock it was 9:55) I heard the cry. The baby woke up, apparently needing to eat or something. I closed my eyes and waited — maybe he’ll go back to sleep. Nope. He was on a roll. So, I got up. My husband, who was in charge, was online doing who knows what (don’t ask, don’t tell) and obviously his hands were tied.

I figured at this point, it was a little after 10:00, I could feed the baby, hop back into bed and still get almost 8 hours of sleep. Yeah, right! My 9-year-old decided he wanted to begin sleepwalking. He was up in the living room, trying to hook up his PS2. I walked him back to bed, fed the baby, and then decided that since I was up, I could start a fight with my husband — and I did. This was a good one, because I did not get back to bed until almost 1 a.m.

The baby was awake by 5:30, wanting to eat again, and so was I. Maybe tomorrow.

The second tip was to get an adequate amount of exercise in each day. I soon understood that this meant exercises other than laundry, vacuuming and dusting. I had heard Yoga was the most effective way to tone muscles while feeding the mind. I figured I would benefit from the exercise as well as the stress release. I was pumped!

Once I found a pair of exercise sweats (yes, believe it or not I do not live in them), I rolled out the exercise mat and plugged in the DVD. My mom had told me that the best way to learn the routines was to watch first. So I did. I sat on my mat and powered down a gallon of ice cream while I watched these crazy bitches contort themselves into positions that would definitely make my husband a believer.

“Okay,” I told myself, "if you don’t exercise you could just eat right." I knew this was going to be no problem. I was craving foods that would add essential vitamins and nourishment to my body. I am intelligent enough to understand that food feeds the mind; really though, my motivation was the extra 50 pounds of baby weight I was carrying around. I could give a shit about nutrition. So I set out to embark on the latest and greatest in diets.

By that afternoon I had stocked my refrigerator and freezer with Slimfast, Weight Watcher meals and South Beach Diet wraps. I had, in my own mind, created my own diet that allowed me to enjoy breakfast, lunch and dinner with all the food I enjoyed.
My first day, I awoke really excited. I poured a cup of coffee (not even my kids would ask me to give that up), went outside for a smoke and debated on what to have for breakfast. My only option was a Slimfast shake. I shook one up and slammed it as I went about my morning routine (Regis and Kelly, Martha Stewart and Starting Over). By 9:15, I was fucking starving. But I had will power and I would not give in. I had another cup of coffee.

I quit…again. I have decided that I am happy with myself (whatever that means) and I cannot afford to eat two to three Weight Watcher meals for lunch. Dude, this is life. My kids own my energy and I am simply on their borrowed time. At bedtime, if I actually get to take a shower, I slip out of one pair of pajamas into another. I can truly say I wouldn’t change it for the world.

I like the way these freaks try to convince you that the changes are only “minor” and that all it takes is will power, determination and conviction. Bullshit. It takes a hot 20-something boyfriend, a weekend getaway and one or two nannies to do the dirty work.