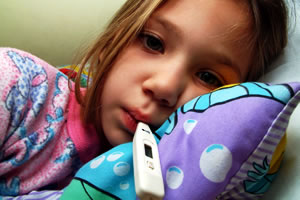 My oldest succumbed first. She came downstairs in the gray light of a winter morning, her face blazing with an unhealthy flush.

A quick hand to her forehead confirmed what her glassy eyes had already revealed. “You have a fever,” I told her. “No school today.”

She sagged onto the couch and pulled a blanket over her now shivering form. I spent the day administering to my sick child. I delivered boxes of clean tissues and plastic bags in which to toss the soggy discards. I checked her head, stroked her cheeks, offered sympathy along with honeyed tea and movie videos. By the time the nursery school carpool had dropped off her brother and the school bus brought home her sister, she had acquired an army of new symptoms. Her throat was sore, her stomach ached, her legs felt weak. I began to suspect that awful flu which was going around, the one that was taking a week or more to knock out of your system. We were in this for the long haul.

That evening, while she lay like a limp rag on the family room couch, intermittently sleeping and coughing, her sister barely touched her dinner.

“I’m not really hungry,” she said.

She felt warm when I tucked her into bed. I brushed my lips against her forehead and convinced myself it was from the three layers of blankets she liked to sleep beneath. By midnight she had padded down the hallway into my bedroom.

“My eyes hurt,” she said in a voice that was unmistakably hoarse and scratchy.

In a household with three children born within five years of each other, those pesky cold germs and messy little stomach bugs tend to get passed down with the inevitability and predictability of unused toys and outgrown clothes. But it had been a long time since I’d had more than one sick at the same time. Maybe I’d been lucky, but neither of the girls had been down with the flu since their brother’s birth four years before, and all of their ailments were generally short-lived. I usually had one graduating from listless to restless before the next one was afflicted.

I smoothed the damp hair from my younger daughter’s forehead as she drifted off into an uneasy, stuffy-nosed sleep. I was debating whether to leave her there or carry her back into her own bed when I heard my son come in fussing, “I don’t feel good.”

We were under a full-scale viral invasion.

Within a matter of days, I had worked myself well beyond exhaustion. I attributed my fatigue to the unbroken cycle of care giving, my achy muscles to physical exertion. Even when I started to feel as if a steel wool pad were lodged in my throat, I swallowed hard and refused to yield. Mothers didn’t get sick.

I’d carried this myth with me from childhood. Dropped from my selective memory were any and all references to my own mother ever walking around in anything less than eternal health. I couldn’t recall the week she had the mumps, nor the numerous colds and flus she assures me she’s had her fair share of.

So it was quite a shock after the birth of my first child to discover that once her newborn immunities wore off and she turned into a human receptacle for every airborne virus, I began to catch things from her. But the only time we’d all been sick together was the winter my firstborn was fifteen months old. But then we’d only been a family of three. My husband and I had taken to our bed, burrowed beneath a pile of blankets, our miserable daughter between us. An ailing trio, we spent the day drifting in and out of feverish dreams, collectively coughing.

Now there were five of us: one husband, dragging himself to work despite his own flushed face and throaty cough; three children in various stages of recovery and clingy from the past few days of nurturing and coddling; and one mother unaccustomed to giving in to pain or disease. But this influx of germs, multiplied threefold, had overwhelmed my immune system. I was the last to fall.

They hauled their limp pillows and droopy blankets onto the floor so I could lower my aching self onto the couch. From somewhere afar I heard my husband ask, “Can I get you anything before I leave?” Who could blame him? Given the chance, I’d have preferred to suffer anywhere but within the confines of this flu-ridden house. I lolled on that couch, the TV’s laugh track snickering in the background as if from some distant world, one where everybody was healthy, and wrapped myself in a blanket of self-pity. I felt awful.

It’s been my experience that children do sense when something is truly imperative. The child who can’t stand to be in the same room with anything green, will eat without complaint the peas on his plate at your mother-in-law’s table. The outspoken child will not announce, “that went out with the dinosaurs,” when her grandfather pretends the thumb between his first two fingers is the nose he just pulled off her face for about the billionth time. And so my children, still sick but no longer pathetically so, allowed me to rest.

When I did get up, I saw the gaze of misery had left their eyes. They were on the road to wellness. I moved around, trying to call forth my usual optimism to find the silver lining in this dark cloud. I told myself I’d grown stronger from a week of caring for the sick, but I didn’t feel strong. I felt weak and dizzy and utterly drained, unable to see my way clear of the fog of lethargy that engulfed me.

They followed me into the kitchen, moping about as I tried to cook, complaining about boredom. But this wasn’t their usual post-illness restlessness. The dullness in their eyes reflected a deeper weariness of spirit. I was contagious. My bad mood had infected everyone. I had pulled them from the depths of illness only to abandon them in a sea of apathy. I felt the weight of my role. Mothers can succumb to illness, but they can’t give in to despair.

“How about we play a game?” I asked, mustering forth an attitude of enthusiasm.

“All our games are boring.”

“What about a picnic?” I suggested.

“In the middle of the winter?” my oldest asked, her eyes growing wide with the possibility.

I pulled a sheet from the dryer—so what if it was a wrinkled mess—and spread it across the family room rug. I handed out paper and crayons. While they colored flowers and butterflies and trees, I gathered cookies and crackers and cheese into a wicker basket. After I’d taped the pictures they’d drawn onto the walls, I turned around and noticed a sparkle returning to their eyes. One started to laugh as her brother tucked a napkin under his shirt, another screamed with delight when she dug into the basket and discovered the chocolate hearts hidden inside.

Later, as we were cleaning up, I noticed my son lying on the sheet, his hand pressed to the side of his head.

I felt myself falling again beneath the wave of despair. Then I remembered. At least ear infections were not contagious.