Scientific Studies from the Male Point of View 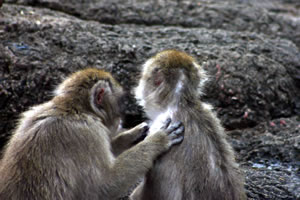 Men are warped in their own, unique way.

That is not a newsflash.

What never ceases to amaze me, however, is just how vast the crevasse that separates the sexes can be. Take monkeys for example. My husband, and father of our two children, couldn’t wait to tell me about the latest experiment he’d seen about the cute little creatures on MSN.com. “Did you see it?” he asked, undeniably thrilled when I indicated that no, I hadn’t.

“Okay,” he said, his eyes glistening, “these scientist guys took a bunch of monkey guys and put them in front of a cupboard that had two doors…” He paused to make sure he had my undivided attention. I looked him smack dab in his hazel orbs and wondered whether I’d remembered to send a lunch with my youngest kid that morning…

“Just the guy monkeys,” he reiterated.

“Just the guys,” I echoed. What if I’d forgotten to stick Luke’s lunch in the backpack…? It was shrimp poppers day! Yikes, I’d be a bad mom…more.

“So anyway, these monkey guys are sitting there right in front of these doors – of course they’re going to eventually open them up, right?” He was nigh on euphoric now.

“Well, behind door number one was this big glass of juice,” he grinned wickedly. “Guy monkeys love juice, Karen. It’s sweet. It’s a treat. They don’t get juice everyday, you know.”

“Yeah, that’s probably true,” I say, getting the sinking feeling that I was being set up for a mammoth zinger of some sort.

“Now guess what was behind door number two?” he prodded. A banana daiquiri? Puff Daddy? Piddly Diddly? I shrug. His grin expanded to an alarming width.

“Behind door number two was…” He started chuckling now. He couldn’t help himself. I realized that I was definitely going to be grossed out in some form or other. He continued. “Door number two had this photograph of a female monkeys butt.”

Now I’m starting to see why my own Monty Hall is suddenly so eager to share the results of what’s behind those damn doors. It’s because this is a sicko study…it’s a guy kind of study.

“Guess what?” he said leaning closer towards me. “After all those guy monkeys had checked what was behind both doors, the scientist dudes took them out of the room.” He snorted. “Then they put them back, one by one, and let them open whichever door they wanted. Guess which door they all opened?” he said, looking just about ready to jump up and down.

Oh gee, I wonder. Would he even be telling me about this study if it unearthed the fact that male monkeys were a sweet, benign bunch of juice drinkers? I was starting to feel nauseated. Hubby was positively stoked. “All of the monkeys opened door number two!” he squealed. “ALL OF THEM! Even though door number one had REAL juice that they could drink right then – remember, they REALLY like juice, it’s a treat — and door number two was not even a real female monkeys butt, just a photo of a big ol’ female monkeys butt! Man, I didn’t know that they were so big and so pink. Can you believe it? They picked a fake big pink butt photo over real juice!”

“You’re not surprised, are you?” I asked him.

“No. They’re guys,” he replied and shrugged.

I opened the fridge and poured him some juice.