The Yellow Bus of Salvation 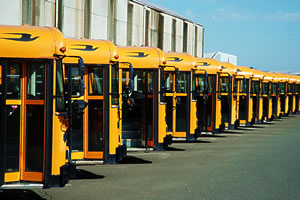 To all the school bus drivers out there… you have NO IDEA how much you mean to me.

I ask you, what parent isn’t positively gleeful when their precious cherubs finally don their Sponge Bob or Dora backpacks to dutifully march down the driveway and climb aboard a big, yellow school bus for their first day of school?  I didn’t cry, like so many other mothers claim, or tearfully waive goodbye. I did an all out, semi-choreographed, no holds barred happy dance back up the driveway! I was looking forward to a whole cup of coffee and a little newspaper time. Some quiet time! A REAL shower — one with special soaps and scrubs and extra time for conditioner — not one of those two minute jobbers where you have to scramble out, wet and un-rinsed, upon hearing the crashes and screams of your little angels trying to kill one another. In fact, I did the same happy dance, complete with an air guitar riff, every day throughout the entire month of September until the one fateful, stomach-turning moment when I was caught by the UPS guy. With the yellow bus sputtering away, and my son cynically squinting at me through the window (his jaded suspicions about my happiness over his departure apparent), I was completing a series of back handsprings with a double back-flip landing when I locked eyes with the man in brown as his truck careened into my driveway. Needless to say I scurried into the house, fully flushed and sweaty, only to have to answer the door moments later to sign for the package.

Yes, we’d traded looks — mine one of embarrassment, his one that signaled he’d clearly seen this sort of thing before and was unfazed. I understood through his knowing nod and slow blink that my secret was safe with him — apparently what happens in the driveway, stays in the driveway. And though I felt I could trust this nice man, the incident promptly ended my euphoric revelry.  When what I’ve dubbed as “The Yellow Bus of Salvation” rolls around the corner, I can’t help but breathe a sigh of relief. Should I feel guilty? Let’s assess…

Prior to the yellow bus, my life was a constant flow of wiped bums and noses, and the cleaning up of spill after spill. I’ve picked up hundreds (make that millions) of books, blocks, legos, bits and pieces of plastic from who knows where and put them back into respective boxes and bins, on shelves and into closets. I’ve wrestled a child to the floor and held him down in order to cut his toenails. I’ve disinfected, bleached and “Lysoled” my way through many a winter. I’ve had countless sleepless nights worrying about what I said and how I said it — what I did and how I did it. When it comes to your children and conflict, you second guess and you worry your way through every mishap.  A mother’s life is full of ups and downs. One minute you feel like you should be at the podium, accepting the Parent of the Year award for coming up with the BEST possible bed time routine, and the next you’re keeping a box of wine cold in the fridge and making frequent trips to the kitchen (I used a Sippy cup to avoid spills).

I’ve made my own popsicles (a disaster — the green remnants of that little Martha Stewart experiment are still stuck to the inside of my freezer door) and homemade stuffed animals out of felt, goo-goo eyes and yarn. Yup, even churned up a batch of play-doh (a recipe my mother had in the 70s) and kept it on top of the fridge in a Tupperware container (Eeeww, mom, this stuff isn’t as good as REAL play-doh… why is it gray? Why are there bumps in it? It’s gross).  Aaargh!  Ingrates!

With broken Crayolas and sore fingers, I’ve colored countless flowers, animals, Disney and other cartoon characters — you name it, I’ve colored it — and I’ve colored it well. I’ve sat on the floor and played “power ranger castle” for hours on end to the point where both my legs fell asleep and I ended up dragging my body across the carpet like an army recruit just to answer the phone. I wrenched my back building forts out of chairs and couch cushions. I’ve kissed and bandaged many a thump, bump, and boo-boo. I’ve bravely endured the sharp looks of disdain when my 2-year-old suddenly became possessed by Satan himself in the middle of the cereal aisle and pitched a back-arching, foot-pounding, venom-spewing tantrum. I’ve held a baby in the bathroom with the shower running at 2 AM — with a cough so vile and LOUD that in the end, I was the one who needed holding. I’ve rushed a child to the hospital in sheer panic, and I’ve calmly suffered the bruising incurred from a death-grip hold my daughter used to ward off the pain and fear of those evil, routine shots at the doctor’s office.

I’ve fed, clothed, and washed. Repeat. I’ve driven my children everywhere just to ensure that their early years were properly enriched – to be absolutely certain they would have some meaningful “mommy and me” time. There were art classes (I still have the dried bean and macaroni “family” my daughter made when she was 3 and the tissue paper sunflowers my son made at 4). There were swimming lessons (I swear that woman just about let my daughter drown), Jujitsu lessons and other countless organized gym classes (oh yeah, got stuck in the sponge pit for about an hour — they had to get three “helpers” to get me out). There were the free library story times and the endless play dates with the biters and pickers from pre-school.

So, in a nutshell, The Yellow Bus of Salvation symbolizes freedom to me or better yet, freedom for me, even if only for a few short hours.  And though I inevitably start missing my children half way through the morning (yeah, right), I still think the first day of school is akin to savoring the most delicious champagne at the best party in town. I love my children with the fierceness of a lioness, and I would throw myself in front of a bus for them.  For those individuals who bravely drive a bus, one big YELLOW BUS in particular, I am voicing my gratitude.  As you carry away our precious offspring, you are delivering something special as well: Freedom to the masses of women (and men) who crave some necessary down time.

Thank you! Please try not to be late.