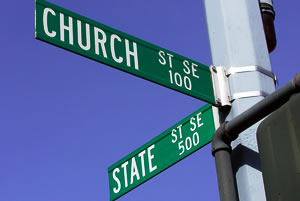 Religion, on a whole, is quite a sore subject for me. You see, my husband and I are atheists. But, we have raised our four boys to be freethinkers and to come to their own decisions when it comes to religious beliefs. When my oldest boys, now ages 11 and 9, were younger, the topic of religion was somewhat difficult to discuss. After all, we weren’t simply spoon-feeding our children certain beliefs for them to blindly follow. Rather, we were discussing all of the different beliefs, presenting them with the basis for those beliefs, and encouraging them to come to their own conclusions – a heavy topic when you are talking to a five year old.

But, as my boys have started to grow into their own, they have begun to explore religious beliefs a bit more in-depth. And they, particularly my oldest, are becoming enraged by the lack of religious tolerance in our society. In fact, my oldest becomes angry when the Constitution and the Bill of Rights are discussed at school. “Freedom of religion, yeah right!” he says.

When I hear these words come from his mouth, I feel a tinge of pride for his sense of social justice and the fact that he keeps his eyes wide open at all times. Yet, I feel sadness at the same time for a boy who is already aware of the ills of our society.

Why is an 11-year-old boy already be so jaded when it comes to our society and the topic of religion? I will tell you why. Already, he has experienced the prejudice of Christianity. Don’t get me wrong, I know all Christians are not the same, but there have been many who have passed judgment on my son for his lack of religious belief. In fact, he cannot go over to a good friend’s house anymore because that friend’s parents don’t want an atheist boy coming over to visit.

You see, this is what is at the root of much of our society’s problems – lack of tolerance and too much desire to push our own beliefs onto other people. It doesn’t hurt anyone for my son to be an atheist, and it doesn’t hurt my son for someone else to be Christian. My son accepts their beliefs as being the ones that are right for them, so why can’t others accept the beliefs my son holds dear? Perhaps it’s because I have raised my son to judge people for who they are rather than what they are.

To further throw salt into the wound, my community continues to see no problem with prayers being held on Veteran’s Day at convocations at our public school. The elementary school Winter Program is filled with songs about Jesus and other songs with a Christian basis and those with beliefs other than Christian continue to be harassed – and no one seems to have a problem with this. When confronted, all the school has to say is, “What’s the big deal? All of those pagans need to just get over it.”

Just get over it? What if I wanted the school to hold Hindu prayer rituals at the Veteran’s Day convocation? What if I wanted to sing songs about Wicca at the Winter Program? Would those of the Christian faith get over it so easily? Yet, time and again, those of us of alternative faith (or lacking faith) are told to just get over it. Get over the fact that the school is teaching my son a faith that contradicts what he himself has decided is right for him. Get over the fact that I, as a parent, should have the right to raise my child to follow the religious beliefs I see fit. Get over the fact that there is supposed to be a separation of church and state and what they are doing is blatantly against the law.

When you look around at all of the hypocrisy and judgment-making imposed by many of a Christian belief, it is little wonder my son – at the age of 11 – has decided so emphatically that it is not the right religion for him. But, I am proud of him for being a freethinker and standing up for what he believes is right, even if it means the loss of a few supposed friends.