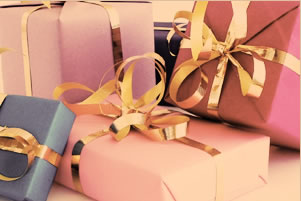 When I was in sixth grade, my mom decided that we should recycle Christmas wrapping. Before you say what a great environmentalist she was, my mother recycled wrapping paper only because she didn’t want to buy any. I had to hand wash aluminum foil until it was a wrinkled, shredded ball that it was useless to cover anything. Then I got the pleasure of holding it up, dripping, to get the "okay" to throw it out. I checked Baggies for holes, holding them up from the hot, sudsy water. If it had a pinhole, it was still usable; if it had a larger hole, I had to hold it up for inspection and approval for disposal. We used old margarine containers to store 2 tablespoons of leftover rice for the next night. I never had an Osmond Brothers, Partridge Family or Scooby Doo lunch box, I was told to bring back the paper bags from my cold sack lunch.

I can understand it all now, of course. I grew up in the late 60s and 70s with parents who grew up during the Depression and World War II.

My parents were true products of their generation. My mom is Filipino and was a nurse when I was in grade school. When she was a teenager, she went into hiding during the war with her mother, brothers and sisters. My father, an American, was raised in the impoverished rural hills of south central Missouri and became a hospital administrator. They were a match made in Salvation Army Thrift Store Heaven.

They met at a hospital, fell in love and married in 1961. A year later I was born. I remember we had plenty and that my folks worked very hard and never complained. I grew up watching black and white television, playing with Barbies and owning an Easy Bake oven, which mysteriously never came out of the box. Now I realize that times were lean for them — my father and mother supported my half brothers, who lived in another state. Life as a child was very different for me than my parents and sometimes it was very hard to understand them.

Looking back, life with my folks was pretty good, although I like to tell the old "lonely only child" story. We shopped garage sales, thrift stores, church rummage sales and exchanged hand-me-downs. One time Mom and I were first in line at the downtown Marshall Field’s the day after Christmas to buy Christmas cards. Back on the south side of Chicago, we never bought anything without a coupon and ran to the store on double coupon day. The best day was double coupon day at Venture, with items that were also on sale. One time my mom bought ten containers of Soft Soap and didn’t have to buy it again for 3 years. They probably cost her ten cents each.

On Christmas morning that year, Dad’s pocketknife came out. His knife, which I think he still owns, was small, with two little blades and a black wooden handle. He carried it everywhere. All the dads did. He sharpened it on this foot-long sharpening stone, which was kept in a broken wooden box underneath our kitchen sink.

I handed him the present. With deliberate precision, he cut through the first piece of tape in the middle of the package taking care not to fray the end of the paper. The sharpened knife cut through the second piece of tape on the end; my mom had done a nice job folding the ends. Slowly, with a surgeon’s steady hands and the focus of a hawk circling its prey, he severed the precious link between tape and paper.

I know I was twelve years old, past Santa Claus, but all I could think was, "OPEN THE PACKAGE ALL READY!"

After an hour (or so it seemed) all the presents were opened. One by one, cut by cut, slice by careful slice. I was so fed up that I could care less that I got another new nightgown and a sampler from Estee Lauder. Afterwards, my mother made sure the wrapping paper was folded carefully, ready for use the next year. And the next. And the next.

By the time I was in high school, I was used to it. I even learned to open a gift without a knife and didn’t rip the tape or the package. It wasn’t hard at all, especially when we used the purple foil wrapper from 3 years before. This time, however, was the really old stuff. I carefully, cautiously lifted the tape from the red, green and yellowing paper used last year to wrap my mom’s Daniel Green slippers — it didn’t even tear the colored layers. The next strip was a breeze because she had used the same site from years past: two or three layers of Scotch brand. Sadly I tore a bit of the last end, but I knew that with a little marker and a little snip of the scissors, it would be ready for the following year. A proud tradition to see the poinsettia paper again, wrapping a necklace box, or perhaps a brand new Norman Rockwell ornament. I smoothed the paper, following the folded edges, and proudly handed the Christmas wrapping paper to my mom, primed for next year.

That’s when Mom said in her little Filipino accent, "Oh, no, I think we can throw it out this year."

There are some things you can never understand about your parents.