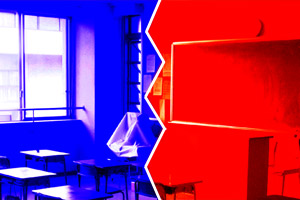 Clearly, liberal values nurture children to the pinnacle of their potential, while the effects of conservatism on children are as pernicious as rat poison. I say this not as a liberal partisan, but simply as an objective observer. Well, okay, that’s not quite true, but I submit to you that “objectivity” in areas like American history is a mythical and ill-conceived goal. Don’t trust anyone who tries to tell you they are “objective” or “unbiased”.

As a substitute teacher and parent of two, I am exposed to children—and curricula—of a wide range of ages. Thankfully, even here in the rural “heartland” the days are gone by when black history was completely ignored, and no mention was made of the injustices carried out by white “settlers” (the “politically correct” term—and I believe in so-called political correctness, but I like to call it by a shorter name, “truth”—is “colonizers”) against American Indians. [I prefer to use the term “American Indian” rather than “Native American” for the simple reason that polls have determined that this is the name the people in question prefer, by a margin of roughly 60-40 percent.]

But though these themes are dealt with more than in the past, they are still whitewashed. American history textbooks carry nauseatingly jingoistic titles like Land of Promise or The Great Republic, titles which carry an implied mission statement for the anonymous hacks that generally write these things. So, when textbooks tell tales of white Americans doing brave, heroic things, they remain firmly in active voice: “President Lincoln freed the slaves with his Emancipation Proclamation.” When the dirty laundry of American history gets trotted out for a brief viewing every chapter or so, passive voice comes to the fore, and history becomes a tale of acts without actors: “The civil rights many slaves had hoped for never materialized, and many who tried to assert their rights became victims of violence.” Of course, what this really means is “White Southerners made a farce out of ‘emancipation’, oppressing and brutalizing blacks as badly as ever, torturing and killing anyone who dared to seek liberty, justice, or equality.”

The reason for this whitewashing is clear: big states like Florida and Texas are run by right wing Republicans whose sympathies still to this day lie with the Confederacy. (It’s a strange quirk of history that the Democratic and Republican parties have almost completely exchanged places over the last century; but you won’t find discussion of this fascinating transition in American history textbooks, either.) Open a textbook and look for John Brown in the index. You will almost certainly find Brown described as, essentially, a murderous lunatic. In fact, he was a brave and very sane revolutionary who did his best to end the abomination of slavery via armed insurrection.

You’ll even find more than a trace of the old Confederate apologia (often called the “Lost Cause”), which was more blatantly fed to schoolchildren for many generations. In this rewrite of history, the Civil War resulted not from slavery (which even Southern partisans know is a tough sell at best) but from Southern defense of “states’ rights” and from economic factors. The “states’ rights” argument is at least partly true: they wanted to assert the absolute right to oppress black slaves in perpetuity. The Declaration of the Immediate Causes Which Induce and Justify the Secession of South Carolina from the Federal Union, which essentially began the Civil War, mentions no other “Immediate Cause” than slavery, and the rights of “slaveholding states” to be free of pesky interference from “non-slaveholding states”. So they didn’t even see it as North vs. South, but slaveholding vs. non-slaveholding! Yet I frequently meet otherwise well educated people who still buy into the “Civil War wasn’t primarily about slavery” myth. Most of these, again unsurprisingly, tend to be conservative Republicans. Look at the electoral map of 1860 and you’ll see the states that voted for Lincoln are almost all now considered solid “blue states” that went for Kerry and Gore—problem is, along with the votes of the old Confederacy, Bush added some Western states that didn’t exist in 1860 to get him over the top. And these right wing crackers are infecting our children’s minds with their vile propaganda, all the while accusing us of the same.

Sure, we liberals are guilty of trying to teach kids such un-American values as compassion, tolerance for racial and religious diversity, justice for the oppressed, and freedom of speech. We tend to espouse ideas like “live and let live” or “innocent until proven guilty” (which means—gasp!—that even accused criminals have constitutional rights). We also put a lot of stock in ideas like protecting children’s self esteem, which—even I will agree—are sometimes taken too far. It makes little sense for every child to be given an "A"; for then an "A" means nothing and children don’t learn how to strive for success.

But the irony in conservatives’ sneering at liberal concern for self esteem is that it is really conservatives themselves whose attitude toward children’s education is a kind of hyper-concern about perceived threats to the self-esteem of the society at large. They want to go back to the comfortable, fictive pabulum they were taught as children. Think about it: they don’t want their children’s precious ears to be contaminated with mentions of evolution, that wicked theory that says we are not at the center of creation but are in fact just another animal (albeit one who figured out how to make atomic bombs and reality TV shows). They are apoplectic at the thought that their kids will suffer from a lack of “Under God” in the Pledge of Allegiance (which was, ironically, written by a socialist), and beyond this they’d like to have teacher-led prayer in public school. Because, you know, their kids might not be religious enough if they get the Bible shoved down their throats every other waking moment of the day when they’re not in school. And most important of all, America must always be looked upon as a glorious nation with a uniformly proud history: “Let Freedom Ring”, “From Sea to Shining Sea”, etc. ad nauseam. The Republican-controlled Florida legislature (you know, the same one that wanted to circumvent the voters and the state Supreme Court, and just award the presidency directly to Bush) even passed an embarrassingly provincial law that requires schoolteachers to teach that “American culture is superior to the culture of all other nations”!

Because, yeah, the truth hurts. I won’t deny that it’s a bit of a bummer to tell kids, “Your great-grandparents got their land the old-fashioned way: they inherited it from someone who stole it from the people who lived there, after killing said inhabitants and maybe doing a little raping and pillaging along the way. Then they got their money by ruthlessly exploiting blacks/immigrants/women/child laborers and shooting union organizers.” But it’s the truth.

And there is a more positive place we can go with this tale: it’s in the inspiring stories of the progressive activists who have fought against these historical evils and have made this nation—though still far from perfect—much closer to the stirring ideals found in the Declaration of Independence and the Bill of Rights. That’s the story we should be emphasizing. Problem is, conservatives are the bad guys in that story. Against civil rights for blacks. Against health care for the poor and elderly. Against protecting free speech and freedom of association. Against better wages and safer conditions for workers. Against clean air and clean water. No wonder they’re fighting like hell to put the blinders back on: they don’t want the next generation to learn what corrupt, self-serving scumbags they’ve been all along.