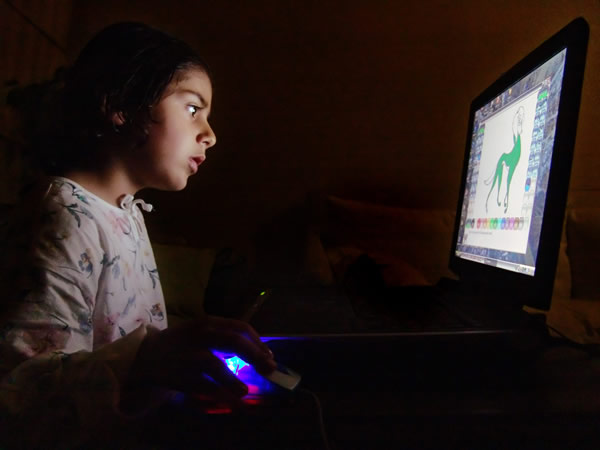 I have a confession to make. I don't own a cell phone. Actually, it's worse than that. I don't own a microwave or a digital camera, either. There are no video games, no Kindles, and no flat screen TVs in our household. I don't Tweet, and I'm not on Facebook.

My nine-year-old son recently asked why our family is "old-fashioned."

"We're not!" I insisted, horrified that I might be mistaken for a Tiger Mom. We just bought a fabulous new PC and printer, and one of our first, best purchases as parents was a digital videocamera.

To be honest, my husband and I are cheap. We're awaiting the demise of our TV and 35 mm camera before upgrading to newer models. It took the crash of our hard drive before we finally broke down and bought the new computer. Our digital videocamera is now nearly a decade old though, so we're looking into digital cameras with videorecording capability. "Out with the old, in with the new" simply seems wasteful when the old works just fine.

There's another reason, however, for our seemingly Luddite ways. I explained to my son that I'm all for technology, as long as it either makes my life easier or improves my quality of life. If it doesn't, I don't want it. He pondered that and seemed to accept it, at least for now.

"Dishwashers, for example," I explained, "are a godsend."

My college years were spent without one, and I hope never to be deprived of one again. Microwaves? Not so much. I enjoy cooking. There's something about mixing ingredients together, adding heat, and transforming the component parts into something entirely new that thrills me. Whenever I use a microwave, even to reheat coffee, I feel mildly depressed. Granted, using a microwave for reheating is more energy efficient than using a pot on a stovetop. I'll buy a few more energy-saving lightbulbs instead and skip the microwave.

As for cell phones, too often I've witnessed people on vacation talking to co-workers back at the office. Who needs that? Or on a hike through a beautiful setting, their attention not on the spectacular scenery but on a voice far away. Years ago, I participated in a fun run in San Francisco. At one point in the race, I ran alongside a guy talking on his cell phone.

Absorbed in tracking the progress of his companion, he never noticed the group of considerably overweight, nude runners that we passed. He was spared the indelible impression that image left on my brain, but I don't regret it for a minute.

Someone once asked me how, as the mother of small children, I could possibly not own a cell phone. Somewhat embarrassed, I gave the Luddite response that, "I just don't like them." But what I was thinking was, "Parents have raised kids without cell phones for thousands of years.  What has happened in the last 20 years that makes it so we suddenly can't get by without them?"

For a short time a couple years ago when my dad was ill, I did get a cell phone so that my mom could easily reach me. While I had it, I found myself dialing up friends and family, just to pass the time. I was on the slippery slope to becoming hooked. I felt myself becoming that person you see in the grocery store, cell phone in hand, asking for advice on what brand of plastic wrap to buy. I didn't want to be that person. Like anything that satisfies an immediate need, it was addictive. So after the few months, I got rid of it.

I'll admit there are times when a cell phone would come in handy. We could stow one in the glove compartment in the event of a roadside emergency or to let others know we'll be late when stuck in traffic. We could take it on trips. My husband and I have considered getting one for such purposes, if we can find a good deal. Most of the time though, I don't have the need for one.

Perhaps I am a bit old-fashioned in that I want to rely on my kids to tell me where they'll be, who they'll be with, and what time they'll be home. I read about parents who rely on GPS devices to track their kids' every move and who are in constant cell phone contact. I want my kids to know that I trust them, until they give me reason not to. If and when that day comes, stalking them probably won't help matters. I want to believe that if I let them know that I trust them, there's a better chance they'll trust me when I try to share my life's lessons learned.

For now, our somewhat unorthodox choices regarding technology are paying off. Seeing how much I love to cook, my kids are showing an interest in learning to cook, too. Instead of playing video games, my son reads voraciously, enjoys origami, and works on his Erector set. My daughter is a prolific artist. They're developing a love of the outdoors that is particularly gratifying. My son is now a Sierra Club member at the tender age of nine.

What it comes down to is that I want my kids to live purposefully, confident in the knowledge that they can make choices about how they live their lives. I'm all for them learning about the latest technological innovations — what's available, what's on the horizon, and how it all works. To do otherwise is to be left behind. But I hope that they grow up applying the same criteria — does it make my life easier or does it improve my quality of life? If the answer is "yes," go for it. But if it's not, I hope they won't feel pressured by societal norms to bring something into their lives that, in the end, doesn't bring them happiness.

My wish for my kids is that they go out into the world with their heads up and arms outstretched, seeing and experiencing all that the world has to offer, instead of head down, hands madly texting so as to miss it all.