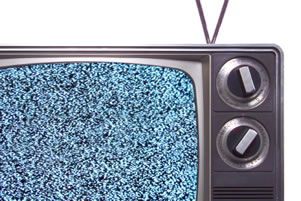 I have never liked television, though you’d never know that if you saw me in a room with one. I immediately goggle any lit screen, and am released from its spell only when someone shuts it off. I just can’t detach from the visual stimulus, whether dog food commercial or cop opera. So I’ve always tried hard to avoid it. For starters, I’ve never bought one. Once when I was in college, the cable guy appeared at my door.

“No way,” he said, peering over my shoulder, certain he’d see a TV with an illegal connection peeping out from under the drapes.

He wandered off, bewildered, and I had a chat with my landlord about why he was knocking. And so I maintained my distance, for a while longer. But then I got married, and everything changed. My husband, Dan, brought an old TV to our first apartment. The screen was maybe eight inches wide, and it wasn’t cable-ready.

“Not in the kitchen, though,” I told him, “And definitely not the bedroom.”

Letting it drop meant that since I didn’t argue, he no longer needed to have it. So we kept the little TV. It lived in the dining room, which still had no furniture, and we lived everywhere else.

Dan was no more attached to the TV as a source of joy and information than I was. For him, TV was white noise, a comforting background presence that let him know he was really home. Often, I would find the TV on, but no Dan. He was outside digging in the garden, or reading on the porch.

“He’s trying to sabotage me,” I thought. But of course he just didn’t get it.

When we bought our farm, we discovered that the network stations didn’t extend to our area. Before I could get too excited, Dan hacked a connection through the VCR and called the cable company to sign on for basic service. Now not only was the evil thing on all the time, but we had to pay for the privilege. I chafed. I turned it off every time I walked by, before it could grab me. I spent a lot of time outside.

Life became more complex. We bought sheep, poultry and a dog. The cats trickled in, a few at a time. My son was born, and a year and a half later, my daughter. Two weeks after my daughter was born, we had our first lambs. Gwen slept through everything, but I found myself repeatedly plopping Zeke in his playpen in front of a Sesame Street tape so that I could assist in delivering the babies.

But soon it was Chitty Chitty Bang Bang, and Mary Poppins, and then Rug Rats and Jimmy Neutron and "please Mom can’t I just watch this one last show?"

“Play outside!” I found myself yelling repeatedly. “It’s a gorgeous summer day! You’re turning into vampires! And by the way, that’s NOT a good thing!”

I complained to Dan, who was still habitually walking into rooms and turning on TVs.

“No, but I might want to someday,” he said. “You’re the mom. Set some rules. Only a half hour of TV a day, or something.”

But of course it was never that simple. Every day, I turned it off, told them no, watched them sulk and refuse to play with anything, especially each other. Usually, the TV won, but once in a while, I’d get them outside. Then our Pied Piper would come home from work, turn on the TV, and go upstairs as his little mice trotted obediently in and sat down.

We might still be fighting this battle on a daily basis, except for my wonderful, destructive two-year-old. Eli had developed a habit of feeding things to the VCR — Matchbox cars and peanut butter, mostly. Dan was always able to clean it up well enough that it kept working. But then, Eli yanked the cable out of the wall, and went after the cord with something sharp (a matchbox car?) so that the cable line had long bare patches.

“Oh, well,” said the older two, who had become resigned to Eli breaking things. “At least we still have tapes.”

They did watch some tapes. Mostly Chitty Chitty Bang Bang, over and over. But I noticed as time went on that they weren’t actually sitting in the room while the show was on. They were upstairs playing with each other. Cheerfully.

If I turned the TV off, they all came piling in, of course.

“But Mom, we were watching that!”

So I left it on. By Christmas, it had tapered off almost completely. We made paper snowflakes together and a long chain for the tree. We turned their train set into a magical park with a zoo, a farm, and a circus. We read books, we played cards, we dressed dolls. My house was clean (no more watching other people fix up houses for me!). I even successfully rewired a lamp, despite great misgivings. Just like on one of those shows.

Zeke came in one day and said, “You know mom, it seems like all those cartoon characters have just gone out of my head. I used to think about them a lot, but now…”

“Really?” I said, doing an inward touchdown dance. It was a great Christmas.

We had snow days, then… LOTS of snow days. Zeke and I surfed the Internet for sites where we could learn how to spell words in Chinese characters, or write his name in Egyptian hieroglyphics. We found a really nifty interactive program that allowed us to “build” a carbon atom out of protons, neutrons, and electrons — starting with the quarks. We all played music together and sang, and Eli danced. And none of the songs were the theme music to anything at all.

This is why I had kids, I thought. To play with them, to teach them, to enjoy them. Not to watch them sit openmouthed in front of a screen this is telling them to be creative and that learning is fun.

After a month or two, I cancelled our cable. I didn’t tell Dan, figuring that my, “sure Honey,” would have some staying power. Besides, couldn’t he see the difference in the kids himself? And in me? I felt a twinge of guilt for not dealing with him directly, but I got over it.

Then Dan walked in from work with a bag of coaxial cable.

“Daddy’s going to fix the TV!!” the kids yelled.

Well, it’s now or never, I thought. Launch a preemptive strike. But how am I going to talk him out of this?

I waited until the kids went to bed, thinking over my options. Finally I did what any reasonable adult would do. I threw a fit.

I don’t recall the details now, but I seem to remember lots of sulking and muttering about how he "wants to see his kids grow up into couch potatoes, doesn’t think they need to learn to read. Guess I’ve just been wasting my time, yada, yada.”

“Whoa!” said Dan who felt he’d been pounced unfairly, “Where did this come from?”

I described to him once more how difficult it is to keep the kids (and myself) away from the TV, and how much better we all were without it and couldn’t he see that? He feebly gave me the “limit them to a half hour a day” speech.

We discussed how this made me the bad guy, and they got surly and didn’t want to play with anything.

He decided not to fix the TV. And he let it drop.

I was thrilled! After all these years, I couldn’t believe it was that easy. Apparently, a few months of no cable allowed Dan to get used to the idea that it was still home, even without the laugh track in the background.

We didn’t say anything to the kids about the cable, and they quickly forgot about Dad’s plans to fix it. Ultimately, I think Dan did agree with me. He just didn’t realize how compelling TV can be, especially for children.

So I get to keep playing with my kids. I’m looking forward to picnics and fishing and sandboxes and walks. And I’m quite sure Dan will enjoy it, too.

Now, if I could just figure out how to get rid of those online games…