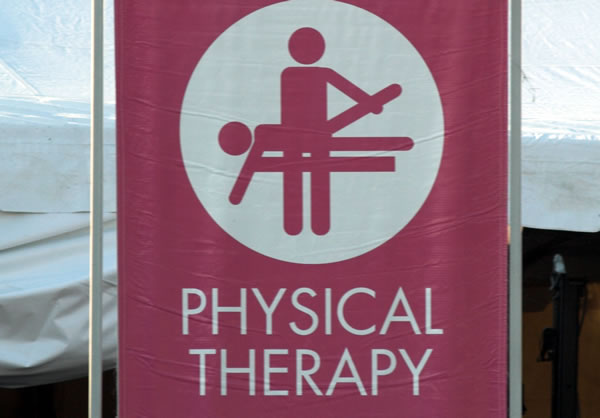 I was curious as to what kind of person decides to specialize in physical therapy for vaginas. I mean, I’m no medical expert, but I do have a vagina, and I can’t imagine that there are many exercises one can do for it. This is what I was thinking while sitting in the sterile, gray waiting room of the hospital’s physical therapy department. I was also wondering if the other patients and staff—big, beefy athletic types in sweats and sneakers—could tell I wasn’t there for a torn ACL. I mean, I was wearing sandals and Capri pants, for chrissake. I certainly wasn’t going to be doing any squats.

Then my PT Lisa, good ol’ Lisa, called me back to a small room. She was remarkably normal—certainly not the kind of person who seemed to have a peculiar attachment to vaginas. Lisa asked me what the problem was.

“Well, I guess you could say my daughter ripped me a new asshole,” I replied sheepishly.

A series of horrifyingly embarrassing questions followed, and then the real low point: Lisa pulled out a “stool chart,” the fecal equivalent of picking a crime suspect out of a police lineup.

Next came the examination. Now, after you’ve had a baby, pelvic exams seem like nothing more invasive than having your temperature taken. On the day I delivered my daughter, after I had been in labor for about 18 hours (only 4 left to go!) and the epidural finally kicked in, I was able to think clearly enough to ask my husband approximately how many people have had their hands in my vagina so far that day.

“At least five,” he said. “And that last guy was elbow deep.”

So a gloved finger or two exploring your nether regions in the name of medicine was no big deal. Then Lisa pulled out the electrodes.

“I’m going to hook you up to a machine that will help measure the strength of your pelvic floor muscles,” she said matter-of-factly.

“No, no. Don’t worry. I’m not going to put these inside you. I’m just going to attach them to the outside for now,” Lisa said as she calmly started placing the electrodes. I was fixated on the “for now” part of that statement. “Now if you can just lift up your bum, please. I need to ground these.” I did as I was told. You don’t mess with someone who has the capacity to electrocute your vagina.

Lisa explained to me how to perform a Kegel exercise. Basically, it’s clenching and unclenching the muscles in your vagina. During childbirth, they can get stretched, and if not properly rehabilitated, can cause incontinence problems. This is why so many of us have been blamed for causing our mothers to pee when they laugh.

“Yes, it is a little, um, militaristic,” Lisa admitted. Militaristic? It was like the Vagina Gestapo.

At the fraulein’s prompting, I proceeded to tighten and release for several sets. Apparently, little Hannah had done a number on Mommy’s vagina; Lisa wrinkled her brow as she watched the lines on the computer screen rise and fall with each clench.

“We’re going to give you some homework,” Lisa said. I guess by “we’ she meant herself and the scary electronic voice woman. Two sets of Kegels, three times a day, sitting and lying down. Of course, anyone who has a newborn at home knows that if you are sitting, you are breastfeeding, and if you are lying down, you are sleeping. Clearly, Lisa didn’t have kids.

“OK,” I said without much enthusiasm, thinking to myself, there is no way I’m putting myself through this again. I had endured with a stiff upper lip every indignation that could come with childbirth: the frozen diapers on my nether regions, the giant disposable underwear, cabbage leaves hanging out of my nursing bra, hemorrhoid pads, and Sitz baths, just to name a few. But stool charts and electrodes were too much. I started to sit up and reach for my clothes.

“Wait, I have to remove the electrodes,” Lisa said. Add patchwork bikini wax to the list.