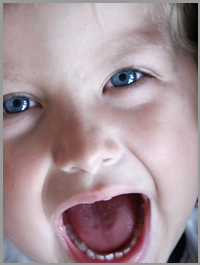 Grey morning light seeps through the curtains. I’m half asleep, baby Nate is snoozing peacefully beside me. I hear three-year-old Simon come into the room. Will he see that I’m sleeping, tiptoe away considerately, and amuse himself for an hour? It’s never happened before, but I allow a tiny shred of hope into my mind. I feel him climb onto the bed and I squint up at him, prepared to start the day.

“What are you doing? Simon, stop that!” I whisper fiercely. Too late, Nathaniel’s awake now.

Simon hits me again. Nate begins wailing for the breast.

I reach into my rapidly-dwindling reserves of self control, and dredge up one of the strategies from this week’s “How To Deal With Your Toddler” book.

Attribute positive intent. “You wanted me to wake up, Simon,” I say, gritting my teeth in the effort to achieve a “nice mommy” voice. “So you hit me to get my attention. Hitting hurts. You may not hit me. If you want me to wake up, you could say, ‘Good morning, Mama.’ Or you could give me a hug or a kiss. Can you do that?” God, I sound like a grouchy, sleep-deprived, robotic Mr. Rogers.

Simon scowls. “No!” Then he hits Nathaniel.

In that instant, the three-year-old in front of me ceases to be my adored firstborn. Instead, glaring unrepentantly at me is a repellent little brat who just hit my baby!

My self-control flies out the window (and I make a mental note to toss the toddler book with it). “Stop that! Stop it right now!” I yell. With difficulty, I restrain myself from hitting him right back. Simon flails his arms around again, and one of them connects with Nathaniel’s head.

Pure anger surges through me. I grab Simon’s arm and dig my fingers in. “Do not ever, ever, hit me or your brother,” I hiss, in a voice so mean it startles even me. Simon laughs, then starts yelling, “Go away, Mama! Go away!” He hits me again.

I scoop up the crying baby and get out of bed. “No one — no one — wants to be around someone who hits,” I inform Simon, coldly. I take Nathaniel into the bathroom, lock myself in, and nurse him there, shivering in the morning cold. Simon wails outside the locked door. His cries leave me unmoved — except by the desire to go out there and really give him something to cry about. It is 6:30 am.

How does that proverb put it? “Pride goeth before a fall” is the phrase, I believe. We had heard about the so-called, terrible twos, but Mr. Baby was delightful at that age, and we patted ourselves on the back. Other people’s two-year-olds had temper tantrums in the supermarket, but just look at our charming child, we told each other, smugly. Well, we’ve fallen now.

My friend Abbie and I talk about it a lot: the anger we feel toward our kids these days. We both have three-year-olds, each with a baby brother. Whether it’s their adjustment to having a sibling, our adjustment to dividing our attention between two, or something intrinsic to age three, as more experienced parents tell us, the behavior of our children over the past few months has provoked deeply disturbing reactions in us.

These kids were our babies, after all. These were the little ones whose every milestone on the road to independence elicited gushing praise and admiration. Look at him hold his head up! See how fast you’re crawling now! That’s right, take a step to Mama – one step, two steps… that’s my sweet little walking boy! Although directly responsible for our sleepless nights, lack of free time, and the virtual shutdown of our sex lives, we didn’t blame our babies for the nearly unrecognizable shambles our lives had become. After all, they were just doing what babies do; it was up to us to adjust somehow.

We don’t cut our three-year-olds that kind of slack.

They hit us while we’re nursing our babies. They scream, “Go away!” over and over for up to half an hour. They throw hard objects across the room and, when we tell them not to, they smile evilly and do it again.

Sometimes I can rise above it all, remain calm, and distract him. Sometimes I can’t. Sometimes I’m just trying to nurse the baby, and I’ve had to get off the couch because he’s climbing on top of me there, and abandon the rocking chair because he’s pushing it into the wall, and God forbid I go upstairs to the bedroom, because then he’ll jump on the bed right next to me and land on top of Nathaniel; and then he starts up with the, “Go away! Go away!” over and over again. That’s when I get angry. That’s when I wish I were a spare-the-rod-spoil-the-child Southern Baptist, instead of a supposedly pacifist Quaker, because all I want to do at that point is hit him.

I don’t, of course. I have never hit Simon (well, once), and I don’t intend to (ever again). But neither Abbie or I could have imagined, even at our most sleep-deprived, that we would ever feel this sort of anger and irritation toward our own children, the ones with whom we had such a bond. “I could be having so much fun with this mellow baby — if it weren’t for him,” we’ve both said, bitterly.

And then we’ll have a couple of good days with no unexplained outbursts, no hitting or screaming, and I’ll remember that after all, Mr. Baby is only three, he’s dealing with being displaced as the sole object of my attention, and this is mostly about me. Someone has to be the grownup in these situations, and much as I might want to scream right back at him, I’m that someone.

Shortly before the war in Iraq began, a father I know stood and spoke one morning at my Friends Meeting about the trouble he was having with his young son, and how angry he often found himself at the power struggles between them. “How can I demonstrate against the war in good conscience,” he asked, “when I can’t even be a peacemaker in my own home?”

It’s so hard to remember, when the baby’s crying and the toddler’s yelling and hitting me, that it’s my responsibility to model another way of dealing with anger and frustration — even if it’s by locking myself in the bathroom until I’m calm enough to try to figure out what that way might be.