by Tracy B. McGinnis 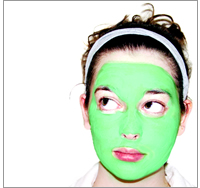 I was standing in line at the grocery store yesterday, scrambling to find my discount card and coupons, while at the same time trying to keep my eleven month old amused by making ridiculous faces, hoping the cashier would put a little energy into the items she was scanning and move our line along a bit faster!

Since becoming a mother, I have memorized the layout of my grocery store and am able to move in and out rather quickly. I have committed to memory the location of my son’s favorite peanut butter cookies and my husband’s special razors blades, not because I love grocery shopping, but because my son only stays buckled into the shopping cart for so long. (Our current running time is about thirty-five minutes). If I happen to get trapped in the store any longer, two things usually happen. One, I end up cringing when I see the total for my grocery bill, and two, my son starts unbuckling his belt, attempting to free himself from the cart, trying to either grab hold of a fellow shopper, or latch on to what is usually a breakable item on the store shelf. Today, we have been in the store for about forty-five minutes, we would have been out sooner, but the lines are unusually long.

As we are waiting our turn, I distract my son from toppling over the magazine rack and dumping out the bins of candy by offering him my car keys, which he accepts wholeheartedly, and begins to shake vigorously at the woman in front of us. I’m not one to usually make small talk, but because my son has now locked eyes with this woman, I feel I should at least offer a friendly smile, to which she will probably look back and say, “Kids!”

I pick up my fifty cent off coupon for paper towels, notice her looking in my direction and say, “Hi,” in that tired sounding voice I seem to have inherited since giving birth. She smiles back at me, and then turns to look for something in her purse.

A purse, which I should mention looks like it cost more than my whole outfit. It’s a small clutch and I can see the little leather tag that reads Coach hanging from the perfect camel color strap hanging off her shoulder. The purse looks like it was custom made to match her designer looking sandals, probably flown in straight from Brazil. Must be nice! Her toe nails are peeking through, painted a flawless shade of cranberry. Everything else about her, from her army green cargo Capri’s to her white linen shirt, reeks of fashion and beauty. Don’t like her, she must be a snob. It’s at that moment I am grateful that no one can hear what’s going on inside of my head.

Without even speaking to this woman, or even knowing her name, I have labeled her as some arrogant, mean person. After piling in my $190.00 worth of groceries I wonder why I didn’t look at her and think, Wow, good for her, she looks great!

When I got home and looked in the mirror I started to answer my own question. There staring back at me was a woman wearing gray baggy sweats with my husbands Duke Basketball t-shirt, sporting a not so put together pony tail. I realized why I had felt such dislike and envy for the grocery store woman. She was someone I knew, she is who I used to be, someone who took the time to take care of herself.

Later on that evening I was talking with my mother, complaining about bills and money. Sarcastically I asked if anyone offered classes on how to grocery shop without making a large dent in your checkbook. I also mentioned the woman in front of me, and confessed to her that I was really envious of the way she looked, and wished I had a little extra time and money to spend on myself. Maybe get a highlight or a pedicure.

Did she not just hear me say I spent $190.00 on groceries?! Not to mention, where would I find the time to get a pedicure, when I have work, my husband, and my eleven month old, taking up so much of my time. I was too tired to get into this with her; I really just wanted someone to hear me out. So I responded as if I were fifteen again, sitting at the kitchen table with my parents, not knowing the right answer to their question. “I don’t know.”

“Tracy, you need to pay yourself first.”

What? I felt like she was talking to me in some kind of foreign tongue. There was silence on the line as I scanned my brain looking for some sort of response. And then it clicked. Pay myself first!

I remember getting my first paycheck from a waitressing job I had when I was sixteen. It was the first time I was making my own money and I remember just staring at that check wondering what I would do with a whole $60.00! My mother, as most parents, talked to me about the value of saving my money, building up a good “nest egg.” But with as much enthusiasm and conviction as she had with saving, she also wanted me to understand the need to pay myself first.
She told me that before I paid anyone else, which at that time was a gas station attendant filling my tank so I could cart all of my friends around, and the girl at the Gap, which was the only place that made jeans that didn’t make me look like I had a boys figure, she said to pay myself first.

This basically meant, recognizing the hard work I was doing to earn my paycheck and finding ways to reward myself, whether that meant saving for, what she and so many others call, “a rainy day,” or spending it on something special for myself. At sixteen, this was great news to hear, because spending on me is basically what I did. But she knew, as I do now, that as the years have gone by, the money that I earn seems to go to everyone but me.

“It’s not just about money Tracy.” My mother chimed in again, the silence had to be getting to her. And then she went on, almost as if she could read my mind on the other end. “You don’t have to necessarily have money to pay yourself first.”

“Ok, you’re confusing me. You just said pay yourself first.”

“Yes, I did. But that could mean a lot of things. Didn’t you say you went to the library and borrowed some books that you’ve been dying to read?”

“Well, have you read any of them?”

“That’s what I mean, it’s not enough just to go to the library and borrow the books. Paying yourself first means setting aside the time to actually read those books and enjoy them. Something just for you.”

And then, the light bulb went on. How do mothers do that? How do they ramble on and on about something that you think means very little and then all of a sudden it hits you, and you think they are the smartest people on the face of the earth.

The next day, after trying for what seemed like all afternoon to put my son down for a nap, I took my mother’s advice. Instead of picking up a load of laundry or trying to figure out what to make for dinner, I shuffled through what had to be ten different shades of nail polish and sat down, right there in the middle of my bathroom floor and painted my nails.

I hadn’t done it in so long that at first I was getting more polish on my toe than the nail itself. It seemed like hours had passed. The house was quiet, my mind started to clear and I could feel a calmness set inside of me that I had not felt in some time. My mind was free of all the clutter and I just sat there enjoying the time I had made with myself.

It was far from a Coach purse and designer outfit, but that next week when I stood in line at the checkout, I stood a little taller, and I even wore sandals that exposed all of my toes to show off my sparkling fuchsia feet. As I handed the cashier my discount card and coupon I admired the delicate look my hands had when they were given some attention.

The grocery store woman wasn’t there that following week, and I wish she would have been, so I could have complimented her on her outfit. I wonder how she would have responded.