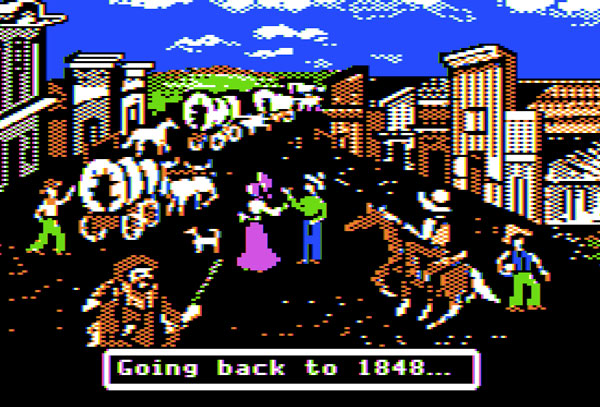 I should know better. The man has four mounted elk heads in his garage. He casts his own bullets. He has been known to disappear for weeks at a time and return looking like Brad Pitt in Legends of the Fall—at the end of the movie, where he’s indistinguishable from the bear he’s wrestling. But when my husband’s uncle asks me if I am interested in seeing some Oregon Trail sites while we’re in Idaho, I jump at the chance. I haven’t been this excited since floppy disks were still floppy.

My husband Ed and I are children of the 80s, and we grew up on the Apple IIe Oregon Trail. I spent whole summers dying of typhoid to the MIDI strains of "Skip to My Lou," gunning down pound after pound of pixelated squirrel and thinking of mildly naughty epitaphs for my tombstone. To be able to share this bit of childhood nostalgia with my own children? Priceless.

"You game for a little adventure?" Uncle Doug asks me as we barrel down the highway.

//Many kinds of people made the trip to Oregon. You may:

1. Be a banker from Boston.

2. Be a carpenter from Ohio.

3. Be a sedan-driving mom from suburbia who’s suspicious that her new espadrille wedges aren’t going to cut it in the sticks.//

I smile and try to look like someone who hasn’t always lived within a few blocks of a Target. "Of course I’m game."

He grins and blows past the exit for Fort Hall.

"We are. That’s the replica. Tourist trap," he mutters. "We’re going to the actual Fort Hall." He jerks the truck onto a dirt road and frowns at my husband in the rearview. "Have you ever known me to take you to places with drinking fountains or admission fees?"

At this point my husband stops making eye contact with me.

Food: Half a box of warm apple juice and a baggie of pretzels

Next landmark: Fort Hall.  "It’s just down the road."

And it isn’t a long trip. Not really. Or it wouldn’t have been, had we used GPS, a map or something other than Uncle Doug’s intuition to get us there. Perhaps it just seems long to us because it seems so long to the kids, mile after mile of empty greenish-brown nothingness.

2. Learn about the trail.

And just when I don’t think I can take it anymore, the jostling of the road, the sweat, the bellyaching monotony of it all, Uncle Doug squints out at the horizon and hits the brakes.

A cloud of dust obscures my vision. "What’s it?" I fumble with my seat belt, fantasizing about covered wagons and calico aprons and green buffalo that go belly-up when you shoot them with the space bar. My heart lurches with excitement. I am a pioneer.

The dirt settles. As we spill out of the car I realize "that" is a chimney-like stone column, fenced in and buried in chest-high grass. Flies buzz lazily around bullet-riddled beer cans on an overgrown path.

//You have reached Fort Hall.//

My stomach drops in disappointment. I am an idiot.

"This is where it all happened!" Uncle Doug says. "There used to be a plaque—bugs musta carried it off." And sure enough, the abundance of insect life here is biblically plague-like in its proportions.

In sidestepping the beer cans and whisking away a cloud of gnats I trip in a furrow and break the strap of my new shoes.

"Watch out for the wagon ruts," Uncle Doug adds over his shoulder as my husband scoops me up.

I put on a brave face. "Isn’t this great, kids?" My four-year-old eyes me suspiciously and mumbles something under her breath of which I catch only one word: boring. My 15-month-old just screams and bats at a mosquito the size of a small horse.

Uncle Doug has little tolerance for complaining. He clucks impatiently and picks up something from the ground. It’s a rusty nail. "Souvenir," he says as he passes it to my daughters, who stop whining just long enough for me to calculate the date of everyone’s last tetanus shot before I whisk it out of their hands. More grumbling.

//The children have exhaustion.//

Finally, my oldest plays her trump card: "I hafta pee." (For four-year-olds, the need to urinate increases in direct proximity to the number of miles they are from anything resembling a bathroom.)

//From the Fort Hall Monument it is 25 miles of dirt road to any clean bathroom.//

"I hafta pee." She looks up at me plaintively.

//Do you want to ford the river, or caulk the wagon and float across?//

My husband shrugs. "Pee on the ground."

Her lower lip begins to tremble.

"Sweetie, that’s what the pioneer children had to do."

Huge tears well up in the corner of her eyes, but gradually we convince her that this is really the only way. My husband and Uncle Doug walk down the trail a piece and discuss the logistics of various stances for relieving oneself outdoors depending on the terrain, all of which have vaguely athletic-sounding names like the squat, the tripod and the hang. I weep inwardly and long for indoor plumbing. Finally, my daughter crouches down and I hear a sigh of relief emanate from the tall grass.

I fish a baby wipe container out of my purse—empty.  A Kleenex wrapper—also empty. Panic sets in and I dump the contents of my handbag on the trail in desperation, coming up with a Costco receipt. My daughter, still half naked and squatting, looks at me in horror at the prospect of wiping her bottom with register tape ("Thank you! Please come again!") and begins sobbing anew. At this point, my toddler attempts to console her big sister by patting her on the back. This topples them both over and I now have two hysterical children—one without pants—rolling around on the freshly peed-on ground.

I’m ready to join in their tantrum until I realize that being in rural Idaho is a bit like being in space: no one can hear you scream. The high desert just swallows my petty drama in its vastness—it’s seen my kind before, and it’s not impressed.

So it’s here, standing in the wagon ruts with grass whipping at my ankles, that I bury any faintly cherished hopes that I could have hacked it in the wild. I picture myself as an emigrant mother, rising at 4 o’clock in the morning to ladle out brackish water to my family, nursing my baby while sitting astride 600 pounds of bacon and molasses in a rickety wagon, peering past my sunbonnet at 2000 miles of trail and knowing I might not last the journey—and all without the consolation of a nice bubble bath and my iPod? I think not.

Then again, I wonder how she’d handle the trails I’ve blazed. Could she take waking before dawn to squeeze in a quick workout, checking juice labels for high fructose corn syrup before a single sippy cup gets filled, catching up on international news headlines en route to the PTA potluck, and rocking the baby in one hand while typing an invoice and throwing together dinner with the other . . . all as she balances the budget and makes a last-minute mortgage payment on her cell phone?  And don’t even get me started about the dangers of modern child-rearing. Given the choice between Indians and dysentery or media violence and childhood sexualization, I’d take my chances with intestinal parasites and natives. At least that’s a fair fight.

They’ve stopped crying now and are sitting up. Two tear-stained faces blink up at me and then down at grass-stained knees and grimy hands.

This I can handle. I whip out a bottle of hand sanitizer and a Tide pen. Eat that, pioneer woman.