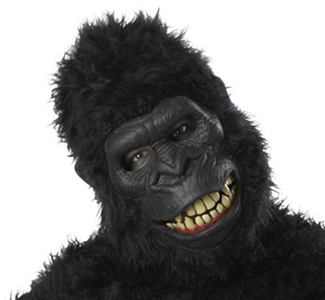 Assigned to clean the storeroom during one of my wife’s semiannual organization rampages, I sift through the jumbled piles of stuff with the determined patience of a paleontologist. Broken toys, tattered magazines, dog-eared paperbacks, old stereo speakers. Wow. I’d forgotten I still own three eight-track players.

Working my way to a stack of suitcases in the corner, I find that all of them are empty–except for one on the bottom. As I open it, my nostrils are assaulted by the smell of old rubber and musty polyester.

I was a starving college student the night the idea hit me. Through some contacts in the theater department I found a used gorilla costume. I purchased a business license, distributed some flyers, and soon the Happy Valley Gorilla invaded the BYU campus. For five bucks a whack I delivered Gorilla-grams: birthday cards, pizzas, and marriage proposals, to name a few. Sometimes I played my harmonica from inside the mask if the occasion warranted a song. I enjoyed a few weeks of notoriety before plummeting grades and competition from a half-dozen unlicensed copycat gorillas drove me out of business.

That was thirty years ago. Now, as I gaze wistfully at the matted craft fur and the snap-on rubber breastplate with authentic-looking gorilla pecs, more memories come to mind…

When telling our children stories of the boogeyman or bug-eyed aliens who would snatch them away to the Lost Planet of Children Who Don’t Eat Their Vegetables weren’t effective, we could always count on tales of “Bowser,” a monster that out-uglied Bigfoot and was nastier than Godzilla.

One evening, when once again the veggies were lying untouched on their plates, I put my fork down and cocked my ears toward the front door.

“I think I heard something.”

I left the dining room and went outside. Moments later, wearing the gorilla suit, I came crashing into the house. My wife clutched our three-year old daughter in her arms and ran through the living room, shrieking melodramatically. I roared louder, and just as I had them cornered, our teenaged son (my co-conspirator) chased me out of the house with a rolled-up newspaper. A few minutes later, panting and trying to keep straight faces, we staggered in to resume our meal. The kids were laughing hysterically.

“Daddy, that was you!” cackled our four-year old.

“No, it was you!  I saw your shoes.” (My second-hand gorilla suit never came with feet. The Happy Valley Gorilla had worn an oversized pair of high-top sneakers made out of burlap and the floor mats from my ’67 Chevy.  They’d long since fallen apart and were never replaced.)

I looked him right in the eye.

“That mean old Bowser knocked me down in the driveway and took my shoes! We had to chase him down the street to get them back.”

He still wouldn’t buy it. This was a kid who unquestioningly accepted a cheesy shopping mall Santa, but wouldn’t believe his own father.

Bowser’s reign of terror is only a warm fuzzy memory now. The kids, despite minimal vegetable intake, have grown into teenagers and young adults, and there’s not much their cornball dad can do to get a rise out of them anymore.

Sadly, I examine the costume. It’s ugly. It’s full of holes. It stinks. Like eight-track players and my favorite green plaid double-knit cuffed bell-bottoms, the Happy Valley Gorilla is just another useless fossil from the Polyester Era. I reach for the heavy-duty trash bag prepared for once-treasured items, but I just can’t go through with it. I carefully fold my beloved costume and put it back in the suitcase, returning it with reverence to its prior location.

I still need this… because in a few more years, we’ll have grandchildren.