This Is Not Your Father’s Pinewood Derby 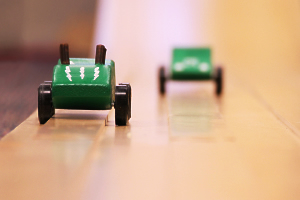 January 1966. Dad and I sat at the kitchen table for an entire weekend to make my first Pinewood Derby car. We took turns whittling on a huge pine block with my new Cub Scout pocketknife, then sanded, primed, masked, painted, and lacquered until we had a glossy piece of craftsmanship that looked ready to win the Indy 500. Brimming with confidence, we marched into the recreation center on Derby Night, ready to blow the competition away.

My beautiful car got smoked in every race. I was devastated, and spent the remainder of the evening with the brim of my cap pulled down over my face to hide my eyes. Afterward, Dad walked me to the parking lot and helped dry my tears with an inspiring speech about sportsmanship. It was a bonding experience right out of My Three Sons or Leave it to Beaver. Many years later, I looked forward to those special one-on-one moments with my own three boys.

Much has changed, however, since my Cub Scout days.

Today you can buy a pre-cut car body in the hobby store, along with “speed kits” to tweak the car for optimum performance. No more whittling, no more guesswork. You can put together a winning car on a Saturday afternoon and still have time to catch the game of the week while your kid melts his brain playing Nintendo.

The convenience of it, however, doesn’t lessen the competitiveness. Especially if your local Cub Scout pack is full of hockey dads.

You can easily spot these guys because their sons’ cars are immaculate. Usually the kids are never involved in building them. Hockey dads bring power tools to the race for last-minute adjustments before the weigh-in. They dispute lane placements, weight requirements, and photo finishes. If their boys don’t win, they’re certain somebody cheated.

Things got so out of hand one year that the leaders invited a uniformed police officer, armed to the teeth, to act as the finish line judge.

The next year we agreed that there needed to be a separate race for the dads. The boys and their fathers would each make their own cars. Sounded cool.

It wasn’t so cool when my car (which was supposed to resemble a killer whale but looked more like a potato masher) got creamed—not just by all the other adults’ cars, but also by the slowest of the boys’ cars, which had a broken wheel.  The following year we had another dads’ race, again leaving the boys to make their own cars with minimal interference from us. I made a rather clever replica of my wife’s minivan. As before, everyone beat me.  It was all good fun, but I seethed inside at every loss. I felt like a wimp. Real men knew how to make great Pinewood Derby cars.

So I finally caved in and consulted the hockey dads:

“Gotta even the weight out, make the car look the same front and back, run it either way.”

“Polish the axles with pumice powder and jewelers’ rouge.”

“Grind all the bumps off the wheels.”

Can you do that?

“Nothin’ in the rules that says you can’t. As long as it meets the weight requirements.”

I had to wait three more years for my youngest boy to become a Cub Scout. With no dads’ race planned, I relished a return to the whole father-son thing. I couldn’t wait to help him with the car, now that I was armed with knowledge from the super dads. A sudden business trip the week before the derby, however, reduced our actual working time to approximately two frantic hours on race day. I hacked out the body shape with a poorly adjusted band saw. While I polished the axles, my son did a few quick swipes with sandpaper on the body and slapped on a coat of watercolor paint. For added coolness, he glued on a plastic bubble canopy from a broken toy. Beaming with pride, he held the finished creation up for the whole family to view. They oohed and aahed encouragingly, even though it was as ugly as a rusted Edsel.

No sweat. I knew the secrets to speed, and it had nothing to do with how the car looked. We arrived at the pack meeting just in time for the weigh-in, took our seats near the track and waited. My son’s name was called. He and two other boys carefully set their cars in the starting blocks. My heart was pounding. The starter released the gate, and they were off—Sssshoom!

We watched in horror as his car suddenly stopped halfway down the track. It just stopped, braking as if a tiny little squirrel had darted in front of it. The judges allowed us to examine the car and make any repairs before the next race. Surely the bottom was dragging or something. We repositioned the quarter I had taped to the bottom for weight. I shot a little more graphite into the axles and returned the car to the staging area, assuring him that we had fixed the problem.

In three races, the car never made it to the finish line.

My son was completely crushed. With that bittersweet memory of my first derby welling up inside of me, I walked him to the parking lot. As I looked into his tear-streaked little face, I thought about the noble advice my father had given. Now was my opportunity to turn defeat into victory. A glorious teaching moment. Somewhere, I knew Fred MacMurray was smiling.

“Son,” I said, and then paused, wanting to phrase things very carefully. “It was my fault. I really stink at this.”

The next year his brother helped him build the car. They won.