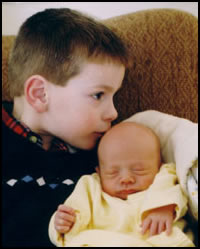 Could I really blame my oldest son for resenting our brand new blob of joy? After all, my son was used to having us to himself, and we did talk the whole “little brother” event up and made it seem like more of a carnival ride than it actually is. I guess we just expected that he would accept the new family dynamic fairly quickly because after all, us adults know that major life changes bring compromise and adjustment, so he should to, right? We tried to explain this as best as we could, but I think I was in denial about the complexity of the issue.

It wasn’t his fault that my husband and I procrastinated in our decision to shake up his world with another baby. It took us almost 4 years to come to terms with the fact that we would become a small part of pushing the U.S. per family child quota closer to 2. I thought that at 4 ½, our son was old enough not to be jealous. We had heard stories of toddlers reacting badly to a new sibling, but since most of our friends were perpetually pregnant for three years, the frame of reference for our particular situation was small. It would be an understatement to say that he did not take to it very well. In fact, I was convinced he was a reincarnated WWII general with impressive knowledge of how to keep prisoners of war at his mercy.

His mission? To make our lives hell until he could make us decide to give the new baby away – preferably in a cardboard box by the side of the road, like you would free puppies. A couple of disturbing moments came from the back seat on several outings.

“Mommy? If we got into a car accident and my brother had to go to the hospital, could we get a new baby?”

Or, my favorite power struggle in the morning while trying to leave, “Mommy? Can we just leave him here?”

His new mantra became a sing-song melody of, “You looovvve him, ya don’t looovvve me-ee-ee.” He said it often enough that he soon abandoned the melody and started to deliver it in a very monotone voice, as if he was tired of saying it, yet felt dutifully required. Whenever he posed one of these questions, I always tried to answer matter-of-factly, not letting on that I was actually quite troubled and shocked. Once I tried to really reason with him.

“No, honey, we can’t. He’s just a baby and if we left him he would be really sad, and if he got hurt, we all would be really sad. Your little brother needs you. He’s going to be looking to you to show him how to do stuff and to protect him.” He said, “Oh.”

Not the clear message of understanding that I was looking for. I had just about given up all hope. I just wanted a sign – something to tell me that this was just a phase. It finally came on a busy morning several months after baby intruded upon our son and his former good gig.

Finally, we all seemed comfortable with each other. I was rushing and frazzled, but thankfully he picked up on this and got himself dressed. I grabbed water, diaper bag, and stroller, and began loading the car. Why is it that with two kids, even the quickest trips feel like you’re about to go camping? The phone rang, and I zipped back inside. It was my mother.

She barely got out “Hello,” when I answered, “Gotta go mom, we’re running late!” and hung up. The TV needed to be shut off, every light was on – not sure why – he wanted a snack, and of course picked the one pair of shoes he needed help getting on. I managed to get out the door, into the car, and I realized I forgot my watch. Went back in – double take – oh, yeah, need to grab bills I had to mail. Were we finally ready?!? Into the car, buckled him in, and remembered I needed a couple forms of identification to get a new library card. Check. Okay, this time I had everything…didn’t I?

As I started to pull out of the driveway and pushed the button to close the garage, it wouldn’t shut. The opener wasn’t working. Now this comedy of errors was starting to irk me and something didn’t seem right. I started to coast slowly out of the driveway and he yelled, “Stop! Isn’t he going to be sad?” “What?” I asked. “Isn’t he going to miss us when we’re gone?” Great, he’s back to this again.

I turned around to look at him, and as I glanced over at his brother’s car seat, I had that anxious sinking guilty feeling that he wasn’t in it. And I was right. “Oh my god,” I thought, “I’m such a jerk!”

I yelled a word I should probably not have said in front of children while getting out of the car almost before I had a chance to put it in “park”. I ran into the house to find my sweet baby boy sitting in his bouncy seat, babbling away. I took a moment and gave him big hugs and kisses.

After I buckled him in his car seat, I walked over to the other side, opened the door, gave him a kiss on the forehead and said, “Thank you. You’re protecting your brother. I’m very proud of you.”

My son had completed his metamorphosis. He was no longer jealous. He was no longer plotting ways to get his new brother out of the house. He no longer resented his brother’s presence and the fight for mom’s attention. He had become the guardian, the protector – the big brother.