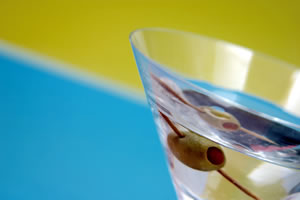 I am a mom who slings booze the color of apple juice, topping drinks off with multi-colored straws. I haul cases of Coors Lite on each hip in much the same manner that I carried my kids when they were toddlers. I wash the sippy cups of grown-ups and scold bold brawlers as if they were fighting over the last Dora the Explorer fruit snack. I am a mother, and I am a bartender. Only recently did I discover that I could play both roles simultaneously; better yet, that the two vocations could compliment each other.

After discussing it with my husband of eleven years, I answered the ad for the part-time bar position figuring that a few shifts a week would allow me more time at home with my kids than my previous nine-to-five as an editor. However, on the way to the interview I quickly lost hope that I’d be able to land the job. The manager of the rowdy, blue-collar tavern was probably looking for a petite blonde working her way through college with whiskey-stained tips or a career battle-axe who’s been serving up pints since the Taft Administration. Surely she would not hire a suburban, thirty-something mom whose greatest bartending accomplishment was mastering a faulty spigot on a box of cheap wine at a barbecue two years earlier. Lucky for me, that was just enough experience to put me on the schedule twice a week.

After many spilled drinks and a few cash register nightmares that I hadn’t seen the likes of since working retail in high school, I finally got to the point where I no longer felt like locking myself in the cooler when thirty people needed a refill at the same time. My 24 hours a week behind the noisy bar, although draining and demanding, earned me just as much money as my former full-time editing job. It also allowed me ample time to visit my children’s school during the day to read books to their classes whenever I wanted. After years of being chained to a highly respectable desk, I was finally available to volunteer with other mothers for holiday parties.

Only on the job a few months, I listened intently one night to the woes of a tearful old man. Suddenly, a routine scuffle broke out by the pool table and all eyes in bar went to the two young women scratching, slapping, and swearing at each other mercilessly. Whether I liked it or not, it was my responsibility to keep some semblance of order and I couldn’t let the sight of hair being pulled scare me away from holding onto my command. Sadly, it wasn’t the first time I had to leap over the bar, physically separate the gladiators, and escort them out the front door. My mind raced as I returned — amidst house applause — to my post behind the bar.

It didn’t help that the next morning I slept through the alarm clock and the kids were ten minutes late for school. Exhausted and depleted, I led them into the main office — my hair still reeking of cigarette smoke and stale beer — and was quickly met with suspicious glares from the secretaries. I thought it best to keep silent even though I wanted to scream at all of them, “Did any of YOU spend an hour consoling a man whose wife just died of cancer and then afterwards break up a girl fight at 1:00 a.m.? Did any of YOU have to be a psychiatrist ninja last night? Of course you didn’t. All of you have normal jobs. Clearly, you have no idea what I do!” And they didn’t. I refused to tell anyone outside of my inner circle how I helped pay the mortgage.

The kids didn’t even know I worked at a bar. We called it “The Restaurant” in our house, but since it was a bistro sans food, crayons, or fun things hanging on the wall (necessary for a decent game of "I Spy"), my six- and seven-year-old had no desire to go there. That was actually a good thing since having them accompany me on Take Your Children to Work Day would furnish them with the worst childhood memory ever. I imagined teaching Riley how to make a perfect Sex on the Beach while Max awaited the afternoon seminar with Dennis, a man with severe Tourette’s Syndrome going through his fourth stormy divorce. Over my dead body.

After dropping my tardy children off at school, I went home and contemplated a new career selling Avon or hosting candle parties since it was now apparent to me that mothers should not be bartenders. It felt weird to mightily bust up a barroom brawl only to come home and delicately replace the bulb in a Snow White nite-lite. How could I possibly pack decent lunches for the next day with my ears still ringing from the booming bass I’d been inundated with all night? Every crazy minute at the bar seemed insidiously compromising.

I viewed the other side of that two-headed coin to be just as obvious. Pub clientele do not want their bartender to be a mommy. They want that cute, single coed slinging their scotch, the one who’ll accept their phone numbers scrawled on napkins. They don’t want me mixing their drink while I explain the pros and cons of playing Twister with a first and second grader before bedtime. Neither my children nor my customers could possibly respect me, and it was easy to think that having these duel professions was both creepy and wrong.

Two hours after dropping the kids off, I got a call from the school nurse. My daughter spilled a carton of milk all over her dress during lunch and I was asked if I could bring a new set of clothes. Had I still been at my old job, Riley would’ve had to make due with whatever the nurse could salvage from the Lost and Found since it would’ve taken me hours to leave the office and get to her. “I can be there in five minutes,” I answered. As I drove back to the school with a clean, dry outfit, I began to feel just a little bit lucky again. I had a job that allowed me to be there for my kids in the blink of an eye.

The next time I went into work, a customer brought in stacks of old baseball cards for my son’s growing set. He thought Max would enjoy them more than his own grandson, now out of the collecting phase. Two days later, another regular brought in a crate of crabs he caught that morning while fishing at the shore because he remembered that I mentioned that my daughter loved them. I then thought back to all of the items bestowed upon me and my family since I’d first begun working there — the homemade applesauce, extra tickets to minor league hockey games, and more than my share of tomatoes and cucumbers from overflowing gardens. I finally saw these offerings not as tips, but as gifts. These presents were from people I truly cared for, people whose lives I knew all about. These offerings were given to me because I am good at what I do. It also finally dawned on me that those who walk into my bar do not look down on me for being a bartending mom. In fact, they just might even recognize my unorthodox undertaking and approve of it.

Perhaps it is the maternal instinct I retain behind that oaken bar that keeps my regulars coming back. I console them through their tragedies with the soft inflection of an attentive parent, and I congratulate them on their achievements just as a good mom would, no matter what the age difference is between us. They understand that I’m not that vapid youngster flirting to fill her tip jar, and they’re glad I’m not that older maid, curt and weary with too many Happy Hours under her frayed belt. I am their Mommy Bartender. And I take care of them.

My non-traditional employment not only gave me that ever-elusive quality time with my kids, but it has made me far more mindful about teaching them gratitude and respect. The job I fell into by filling out an application by hand while leaning against a counter has taught me more about compassion, humanity, and guardianship than any of the cushy jobs I acquired with my big, fat résumé. I can now offer my children an insight into life that I never had before. I can teach them first-hand that there is nothing wrong with being unconventional. As long as the work is honest and ethical, it doesn’t matter who you are or where you labor. My initial perception of what a “good mom” does for a living was shattered like a highball glass and my son and daughter will only benefit from this breakthrough.

On Take Your Children to Work Day, Max and Riley will visit the 9th grade science classes that my husband teaches at the high school; they will not be learning how to gently cut someone off who’s had enough rum. When they are much older, and learn what exactly a bar is, I’ll be happy to tell them what I do. Perhaps they’ll think it’s cool that their mom can break up a girl fight, counsel over a dozen despondent souls, and fix a broken jukebox in just a few hours. But for right now, they’re pretty content with how I read the character voices during story time.

While the license to recite Dr. Seuss on a whim during the school day is the reason I answered the ad in the first place, I’ve happily found plenty more benefits along the way. I’m now proud of what I do and freely admit to people that I’m a bartender and a mom.

“You’re so lucky,” they tell me, wide-eyed and genuine. “That must be so much fun.”

"It is," I answer with with pride. "And I love every crazy second of it."