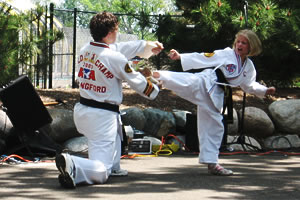 Earlier this summer, the owner of my kids’ Taekwondo school sent us an e-mail. It said:

I’d like to sponsor Katie for The Little Miss contest in our town. What would you think? I think she would be great! Can I have your permission to ask her?

It was hard at first for me to identify the predominant thought in my head, since so many were competing for attention. But, finally, one word silenced the rest with its persistence. That word was: no.

We’re just not a beauty queen kind of family. I’m not a pageant contestant kind of mother. I have a degree in psychology, with a lot of my course emphasis in women’s issues. I had a clear vision of how I wanted to raise my children — my son and my two daughters — before they were even conceived. I imagined brilliant, athletic children who read for pleasure and produced works of art in their leisure. They’d play musical instruments, stand up for the oppressed, love the earth and walk neighborhood dogs for free. Then they’d cure cancer and discover a clean burning fuel source when they grew up. Tiaras? Sashes? Doing the princess wave from a float in the town parade? Never in my scariest nightmares.

I nodded. It was true. I could almost see my nine-year-old Katie dragging her little pink suitcase behind her down the street, her blond bob bouncing furiously in the glow of the setting sun. I’m not a Little Miss kind of mother, but somehow I have a Little Miss kind of daughter. She was all over the Barbie dolls and Disney Princess paraphernalia from the start. I stuffed a gag in the tiny Gloria Steinem who rides on my shoulder and bought them for her. Toys encourage imaginative play, and the books are books. Reading is reading, right?

One day, when she was about four, she was sitting on my lap watching television and a commercial for a clothing store came on. My daughter reacted like we were watching fireworks on the 4th of July.

I stifled my laugh until it came out of my eyes, in the form of tears. I just couldn’t hold back anymore.

“Oh, mommy!” She said, “Why are you crying? It’s the clothes. I know, I feel like that too.” She took my hand in hers. “The clothes are so beautiful they make you want to cry.”

There’s no point in pondering anymore where this child came from or how it’s possible that she’s my daughter. She’s not a chip off of me at all. My teenage son is a reflection of me — shy, self-conscious, tall, brainy, sturdy and cautious. I can look at his face sometimes and just know exactly what he’s feeling. I can feel it like it’s happening inside my own skin. But, his sister is a mystery. She’s hyper-sensitive and feisty, smart, short, tough and girly. She’s so much that I am not, but wish I could become. Introverts secretly dream of being extroverts.

“All right,” I said. “She can do it. We’ll sign her up and see how it goes. But, no make-up. The child does not need to wear make-up or a hairpiece. That’s not debatable.”

“Well, I’m fine with that,” my husband said, “but I don’t know if she’ll agree to those terms.”

Katie was elated to be asked. My son got a big kick out of it, too. Just the idea of his sister being Little Miss Anything gave him the giggles. We found out it’s not a beauty pageant, thankfully. Our Taekwondo studio sponsored last year’s regular, full size, teenage Miss Town Name, so they’ve been through this before. The selection is based on a series of interviews and really, they’re looking for a girl in a specific age range who is articulate, mature for her age, and has demonstrated good leadership qualities. No talent competition. No strutting on a catwalk in a bikini. If she places, there is a year’s worth of community service events and doing her part as a member of the “Royal Family.” At the end of the term, the winners are presented with their college scholarship checks. I can go along with this, if I must.

A few days later, Katie and I were at a local store that sells supplies for making jewelry. We were looking for charms to put on a good-luck bracelet for her seventeen-year-old friend who is competing in a very important Taekwondo tournament at the end of the month. I asked about a martial arts charm and was directed to the only one they had—a man doing a kick. It came in either silver or gold, but none with a ponytail or a perky nose. It didn’t come in any way other than clearly masculine.

“Do you have any charms of… swords?” I asked. “Or, um, maybe little hatchets or something?”

The shopkeeper looked at me like I was weird and shook her head.

My daughter and I settled on the gold man doing a kick, a four-leaf clover, the girl’s birthstone and some other things to add to it. But, the experience put some things in motion in my head.

When we got home, I looked over my daughter’s trophies. Each and every one of them was adorned with a man kicking or punching or squatting in a deep stance. There was not one shape or figure that could be mistaken for female even if you crossed your eyes so the features were blurred. How could I not have noticed this before? My daughter has her room decorated with these gold statues that she’s earned and not one of them physically represents her. The medals were different. Many of them, the vast, vast majority of them had martial arts men on their faces. But, I also found two that had headless, uniformed shapes sparring. And, some only had the American Taekwondo Association emblem, which is a genderless shape doing a kick. I was proud of the ATA for not being sexist — how odd to feel a pang of thankfulness when moments ago you didn’t realize that there was anything to feel grateful for. Then the pieces fit together like a puzzle and I could see the big picture.

All of our school’s medals had the ATA figure on them. This is not a coincidence. The owner of our school is a 5th degree black belt, a cancer survivor and a woman. Her grown daughter is also a 5th degree black belt and an engineer. Katie’s friend is a seventeen-year-old, 2nd degree black belt who wants to be a CIA agent when she grows up. Katie herself is a nine-year-old, 1st degree black belt who wants to be president when she grows up. And, there are other exceptional girls and women, too, like last year’s Miss (town name), and the RN who teaches the little kids’ classes. There are too many of them to mention. This place produces smart, strong women like it’s some sort of girl factory. The owner had to have noticed the predominance of male shapes as a female competitor herself, and as I was just now experiencing them — as the mother of a female competitor. It couldn’t be accidental that the medals she chose for the winners in her school had androgynous figures on them. It was so subtle, but when I noticed it, it was such a very important statement.

I went back and re-read the e-mail asking us about entering Katie in the Little Miss contest, and this time, whether it was intended this way or not, I read between the lines:

I’d like to sponsor Katie to represent our Taekwondo school and girls everywhere. What would you think about that? I think she would be great in exemplifying what little girls are — strong and athletic, but not freaky or to be mistaken for boys. Do you think you’re able to step aside and to let your daughter carry the torch of feminism for her generation? If she wins, can she declare, through her smile and wave, “Hey, look at me, I am today’s girl and tomorrow’s woman. I play with Barbie dolls, I wear a gown and a tiara and I can do more push ups than any boy in my class. I get good grades, coo at babies, and can fling around dangerous-looking weapons with grace.” Can I have your permission to ask her to do all that?

When I think of it that way, the only voice in my head is the one saying: yes. Because, then maybe someday tournament winners will always be able to choose either a male or a female figure on their trophy. Or, maybe there will be unisex bracelet charms for every sport. Maybe someday there won’t need to be Little Miss contests to make any kind of statement about strength and femininity coexisting, because it will just be the way things are. Maybe we really will get to use “he or she” when talking about our president. But, for right now, I really want to see my daughter doing the princess wave from that float.