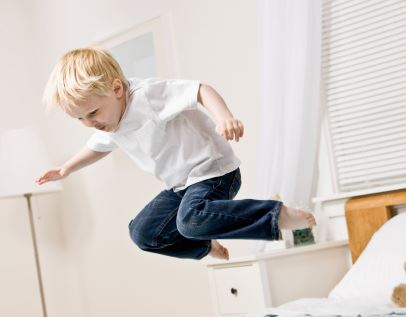 There’s a code they must live by, boys, and that is if there’s a hotel bed jump on it.

It isn’t their fault really because way back when they were in the womb and their brains were forming, the frontal lobe that controls reasoning and planning, that doesn’t complete its formation well into their twenties. So until then, they are going to jump on a hotel bed because they must.

Once across the border into Canada several years ago, the husband and I with two of our boys, then 15 and 13, started to plan our international vacation.

“Have fun, I’ll be at the casino.” We really never vacation anywhere that doesn’t have a casino.

We found our hotel, checked in and dragged our luggage up to the room. We were in there for fifteen whole minutes when the incident occurred. It became the
international incident once we returned to American soil.

The husband was looking up directions, I was putting things away and the boys were jumping on the beds. The older one decided to body slam my baby onto one of the beds, a wrestling technique he learned from educational television. They both jumped off the bed wide-eyed looking at the youngest ones right arm.
Mumbling sounds came from said boy and a look of panic set into his face as he lifted his arm up in such a manner that one would think it was broken or
something. The other one looked guilty.

“Did you just break his arm?”

“Is your arm broken?”

I looked up at the husband and we exchange a ‘We should have left them at home’ look.

We inspected the arm. I was genuinely concerned because I’m the mom. He was wondering if he was still going to play Black Jack. Some frontal lobes take
longer to form than others.

And he left. I called the front desk and ask, “I was just wondering, where your nearest Emergency Room is?”

“Is everything alright ma’am?”

“Yes, everything’s fine. My son may have broken his arm.”

She proceeded to give me instructions. Then I made my next call.

“Hello? Yes, I was just wondering how my health insurance works if I’m in another country. It’s just Canada but still technically another country, right?”

“Ma’am you have to pay the bill in full in another country and then file a claim when you get back and we’ll reimburse you.”

So the Canadian Hospital was out. Now how is it going to look if we, not even an hour ago, crossed over the international border and then crossed back over and then back again? And the guilty look on the older one wasn’t leaving anytime soon, not by the way I was looking at him.

Every trip we take I learn something that should have been packed. One trip I must have needed rubber bands because I found two. This trip I learned an ace
bandage and a splint, but since I didn’t have those now, I wrapped the arm in a white hotel hand towel and secured it with rubber bands.

“We are going to find a drug store and pizza.”

We paraded past the front desk with every staff member staring at us yanks and out the door we went. We ended up staying the long weekend in Canada. I kept the kid hopped up on Canadian aspirin which he swears is way better than U.S. aspirin. Bought an ace bandage and went on the Maid of the Mist. He was a
trooper, he’s always had a high tolerance for pain.

Once back in the states I called our doctor, he wasn’t concerned but took an x-ray just to have a look. He came back to the room fifteen minutes later with
the x-ray and a splint. Also, looking perplexed.

“He should be crying. Both bones are broken all the way through. You have to go to an orthopedic surgeon and get that in a cast, right now.”

Mother of the Year here I come.

“Wow.” I said, once we were in the car, on the way to the next doctor.

“Yeah mom. We knew it right away, we heard it pop.”