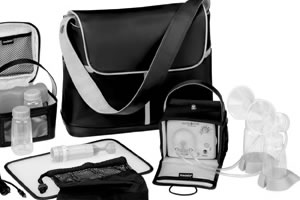 Finally — the ultimate in high-fashion breast pumps is here! As its name implies, the Pump In Style has it all for the nursing mom who seeks high style in a breast pump. A true slave to fashion (think banana hair clips and shoulder pads in the ’80s, flannel shirts in the ’90s), I’m thrilled to know that when it comes to pumping, I won’t have to fall off the fashion bandwagon.

So, just how does the Pump In Style distinguish itself as haute couture? Turn to pg. 2 of the Pump’s user guide and see for yourself. A photo shows two attractive, professional types talking and smiling in delight. One sports her Pump In Style in its hip microfiber black backpack, the other in a fashionable black briefcase with ergonomic padded straps. (Black, I’m sure you know, is also all the rage, not only for its slimming properties but also because it goes with just about anything. Brilliant!)

Beyond the black bags, the Pump In Styles possesses other features that help elevate it above the average human milking machine, such as suction action most similar to a real baby’s sucking (how vogue!), and an engine so smooth it eases highly stressed mom’s into a Buddha-like calm. To understand the sound, imagine a repetitive whirring mantra, something akin to an audio Rorschach test that projects the contents of one’s unconscious on any particular day. Last night, I was lulled by the engine’s redundant: Ethan Charles, Ethan Charles, Ethan Charles (my son’s name). This morning it was: Bjorn Borg, Bjorn Borg, Bjorn Borg (a famous 1970’s tennis player, if I remember correctly). I’m not sure what this means but I have a very strong desire to play tennis today.

History of the Breast Pump (societal):

Interestingly, the breast pump was born out of function, not fashion. It was invented by a German-born mechanical and electrical engineer named Edward Lasker, most likely a man with a fetish for cow teats or women’s tits or both who channeled his obsessions into a helpful and lucrative invention. Besides science, Lasker was also known as a world-class chess player, a title that mocking friends transformed into "chest player".

History of the Breast Pump (personal):

I knew very little about breast pumping before giving birth. There were certainly no Barbie breast pumps when I was growing up, and the Cosmos and Glamours that I coveted in my teenage and young adult years offered no articles or advertisements on the subject (this may be different today, now that pumps have become "In Style") In a way, society failed to prepare a whole generation of girls for this important rite of passage.

Then again, had someone tried to explain the breast pump to me at age 15, I wouldn’t have understood it. I was, I must confess, a late bloomer who couldn’t believe I’d actually sprout breasts much less possess ones so engorged with milk that I’d eventually have to pump them six times a day.

Where can the pump — such a stylish female accoutrement — go next? I suspect it may have to pass the ultimate test of fleeting fashions: the ability to cross gender boundaries (think Diane Keaton in Annie Hall).

This may surprise you, but according to the reputable Web site Babycenter.com:

After reading this, I asked my husband if he’d be willing to use my Pump-in-Style to test this hypothesis out — for the sake of science and literature (this column).

I’m still hoping he’ll reconsider…maybe when the Pump In Style for Men comes on the scene? We ladies could certainly use the help.