It Works For Us 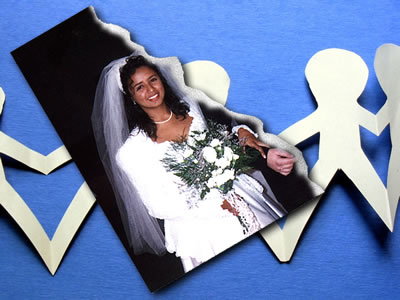 It didn’t hit me until I was confronted with it in of all places, an overly long line in a Wal-Mart. I was impatiently waiting for the line to move on and for my mother to return from picking up the few items she had forgotten, when someone behind me said my name. When I turned around, I saw a vaguely familiar face — the mother of one of my former high school classmates.

She started talking quickly, and this became a much-needed distraction for my two-year-old son who had been getting very impatient with the wait. I tried to keep up with what she was saying over my son’s babble, but unfortunately didn’t catch whose mother she actually was. Nodding at what seemed appropriate times, I acted like I comprehended what she was saying about her own children and what they had done since high school. Then her attention turned to my son, and I breathed a sigh of relief as talking about him was an easy subject for me to manage.

I noticed she was looking at my hands as we talked about my son’s fascination with all vehicles with wheels or tracks, especially Thomas and Friends. She was so impressed that he could name so many of the engines pictured on a mini catalog page that had come in the toy packaging, and that he now had safely grasped in his little pink hand. I suppose she finally got up the nerve to ask about my marital status, after not seeing a wedding ring anywhere. I inwardly cringed when I saw the look on her face as I answered.

“I’m divorced. I have three children from the marriage, but they’re with their father right now. I’m not married to the father of this little angel.”

She seemed to have lost the ability to speak after hearing this, at least for a few moments. I looked quickly to see if the line was abating, and sighed when I noticed the line light flashing. The cashier needed assistance. As she regained her voice I turned back to face her. I fought the temptation to ignore her completely.

“Oh. Well, perhaps it is best that you’re on your own after a divorce. Does his father see him at least?”

“His father comes to see us all the time. We see him at least once a day, unless he’s away on a trip for work. He’s a part of the household, but he just doesn’t live with us all the time,” I replied.

If the first response hadn’t managed to silence her, I thought this one had a good chance of it. After another few moments of silence, and the arrival of my mother, the woman only managed to exchange greetings with her, and mumble something about forgetting something before exiting the line. I didn’t bother to see if she just went to another line, but I have little doubt she did.

At moments like that, I think I end up seeing just a small portion of the truly institutional nature of families. Over the years I have learned that there are at least two slants in the meaning of that word, and the one that causes people to have narrow definitions of what a good family can be is decidedly negative. It is odd for me to see people who think it would be somehow better for me to be on my own, without the father of my youngest child. Perhaps that would better fit their definition of the sort of man who would “take advantage” of a newly divorced woman and get her pregnant. To them, a man like that is the sort who would walk away.

The fact is that this man and I are not proponents of marriage. My reasons are obvious, given my divorce, and he is just the old-fashioned confirmed bachelor. It infuriates me when some people pass judgment on our choices about how we will live, and even worse, try to imply that the home environment we are providing for our son is inappropriate. Unfortunately the people who hold this opinion are not the ones I would expect it from: the highly religious individuals who would call that sort of lifestyle “living in sin”, and older people who are just set in their ways.

That woman in the Wal-Mart was one of the oldest ones to show her disapproval, and was the least vocal. It has been an uphill battle with more than a few people around my own age to get them to understand that this works for us. They kept saying that somehow we were cheating our son out of a good life by refusing to make it legal. Their major argument was that it’s just different when people leave each other; we’re together, so why not make it formal? “We don’t want to” never seems to totally cut it with some people. At most we’ll entertain the concept of actually living together, but that will have little quirks, to avoid the State declaring common law marriage between us.