Imelda in the Making 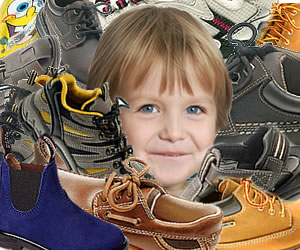 My almost two year old son is obsessed with shoes. At first, he just seemed excited to have shoes. He liked trying on Mommy’s and Daddy’s shoes, and was genuinely excited when he got a new pair of slippers for the cold and rubber boots for the rain. His excitement was somewhat contagious which led his dad to order him a miniature pair of Blundstone boots (“Blunnies”) so they could match, months before they would ever fit. I took advantage of a few winter sales by purchasing some cool Vans-like sneakers and Merrell-like slip-ons from Land’s End. Put these events together and you have a toddler who owns seven pairs of shoes. Take this fact and add to it the toddler’s ability to speak and open his cabinet door, and you’ve got trouble.

The first sign of trouble involved the rubber boots that his dad picked up at the thrift store one day. Their appeal, I believe, had to do with the fact that Satchel could put them on himself. Not only did he want to wear them everyday, he wanted to wear them in the tub and in the bed. I had a hard time letting him wear them everyday, because I have been making up for my lack of fashion with Satchel. I may look pretty blah, but my boy always looks cool and ready for a photo shoot. The rubber boots did not fit into my preconceived notions of how he should look. Especially when he insisted on pairing the boots with his Elmo sweatshirt, that frankly is a bit too babyish for my little man. After plenty of tears and fits, I simply gave in. I realized that it was time to let go and let him have control over some decisions in his life. It was actually quite liberating and I gladly pulled out the rain boots whenever he requested them. Even in the bath.

Before this epiphany, my husband and I made a big mistake. In order to get the wet boots off of him so they wouldn’t get our family bed wet, my husband insisted that I bring out Satchel’s new sneakers that I had hidden in the back of the cabinet since they were two sizes too big. When presented with such fabulous shoes, Satchel easily forfeited the rubber boots and got in bed with his nice, new, dry sneakers. I was secretly pleased that the rubber boots had been replaced, because the sneakers were incredibly cute. And cool.

Sneakers it was, everyday…until we went to my sister’s house for a Super Bowl party. I found Satchel in my four-year-old niece’s closet perusing her shoe collection. He emerged with a pair of black ankle boots with silver teddy bear zippers. Sticking to my vow to let him have some decision making freedom, I helped him put them on and let him wear them around the house, thinking his cousin would spot them soon enough and demand to have them back. Instead, my sister said her daughter had outgrown them long ago and he could have them if he wanted. Um, great! He wore those teddy bear boots around the clock even though they were even bigger than his sneakers. Although I was dealing with my inner embarrassment, my husband reached his breaking point after a couple of weeks and hid them in the closet before our trip to DC to visit friends.

In order to keep our luggage light, we decided to only pack three pairs of shoes (that WE liked) for Satchel: His Blunnies, his cool sneakers, and his slippers. My husband really wanted Satchel to wear his Blunnies on the plane, despite his protests to wear his rubber boots. To get Satchel on board, he convinced him that the Blunnies were indeed “airplane boots.” It worked, but once we were on the plane he wanted them off immediately. Thanks to a few new toys and some snacks we were able to get him to our friend’s house without too much hassle. However, we were there less than an hour before he discovered our friend’s three-year-old daughter’s Dalmatian rubber boots. As we headed out to dinner, Satchel wore Ella’s rubber boots and Ella wore Satchel’s cool sneakers. Everyone was happy, except me, due to the fact that the boots ended up on the floor about 1500 times before the end of dinner. But little did I know that the next day Satchel would find Ella’s closet and spend the rest of the weekend in her white, patent leather Maryjanes.

We are learning to have a sense of humor about the whole thing. I actually took Satchel to Target in one blue slipper and one brown, puppy dog slipper without ever really being embarrassed. In fact, I started to think Satchel’s sense of style was pretty cool. However, later that day at the park when he threw off his rain boots because he wanted his mismatched slippers out of the car, I was less amused. Especially since it required me carrying him, barefoot, for half a mile. (Did I mention I’m extremely pregnant?)

My husband seems to think we should keep adding to the shoe collection to keep him happy (“Let’s get some Elmo slippers! Or flip-flops!”), but I think his shoe choices are already overwhelming. One evening, Satchel literally cried for thirty minutes because he couldn’t decide which pair of shoes to wear or how to wear more than one pair at a time. I have never seen him more frustrated. What is it about shoes? Are all toddlers obsessed with them, or does each toddler have his/her own special obsession? Is it genetic? How long will it last? What am I supposed to do?

For now I am taking it one day at a time. The really embarrassing teddy bear boots are still hidden in the closet. The sneakers have lost all of their appeal and I’m ok with that. The slippers have stayed in the house. Upon waking, the rubber boots are put on Satchel’s feet. Before going to school, he happily changes into his slip on Merrells. He (somewhat) patiently waits until he gets home from school before kicking off his shoes and insisting on a new pair. I really can’t complain.

However, he did just discover the colored socks.