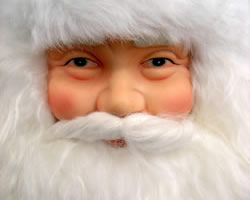 When I was in second grade, a know-it-all girl at school smugly told four or five of us that Santa Claus wasn’t real — that it was just our parents, and the tooth fairy was just our parents, too. She also filled us in on where babies come from, although she had the function of belly buttons quite wrong.

I remember being disappointed at this news of Santa, and feeling like a little bit of magic had disappeared from my world. At the same time I wasn’t all that surprised. I had heard the grownups moving things around on Christmas Eve. Plus, even before the grownups had gone to bed, my cousins and I weren’t allowed to walk through the living room on the way to the only bathroom in my Grandparents’ house. And Santa couldn’t have already come, because the grownups were still awake and everyone knows nobody gets to see Santa on Christmas Eve.

Sometimes we would go visit Santa Claus at the department store. He wasn’t very convincing, with his fake beard and worn red suit. No one took pictures, no elves were in attendance, and no animated reindeer grazed in the snow. This poor Santa had no gingerbread house, no red carpets, and no specially designed Christmas thrones — just an ordinary wing chair (probably drug down from the neighboring furniture department).

These days, I think my twelve year old still believes in Santa, and who can blame him? Santas have real beards now. Today’s Santas wear velvet pants, embroidered suspenders, and holiday sweaters. Santa is obviously shopping at more upscale stores these days, or those elves have really learned to sew.

And instead of a cute little half-hour animated special on Kris Kringle like I watched as a child, we have The Polar Express in 3D IMAX. A movie so convincing and well done it takes even an adult’s breath away.

Part of me regrets telling these lies to my children, continuing the untruth. I wouldn’t dream of telling them that the stork brings babies, or that the boogie-man eats boys who talk back to their mamas. And yet I’ve told them that a magic man brings presents made by elves, that a mystical being trades their teeth for money, and that a small furry long-eared mammal delivers baskets of candy on Easter morning.

In our family, we do other things for Christmas besides Santa. We make cards with pictures of our year, and way too many cookies and batches of fudge. We mail presents to relatives, and decorate a tree. And we never miss the Electric Safari at our Colorado Springs zoo.

As we walk up the mountainside, my three boys are unusually quiet. The temperature hovers just below freezing. Millions of lights illuminate this December night, glittering in the cold. Outside Santa’s cabin, two live reindeer stare unblinking as we approach, their breath hanging in little clouds. My children’s faces are full of excitement and wonder. A few snowflakes swirl, turning colors in the lights, and for a few seconds the magic is back — and I believe.