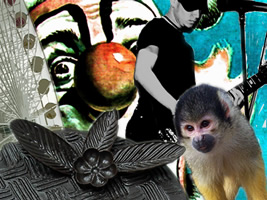 I just received my credit card statement today, and good news! I earned enough miles from my charges this month to fly around the world for free – twice. The bad news is that none of the items on the statement still reside in my house. They were all birthday presents for my son’s friends. It seems that back in the holiday season of 1997, every one of the parents in his class got together over coffee and came to the unanimous decision to have unprotected sex. Merry Christmas indeed. Or perhaps a GQ article from the time advised men to take advantage of the amorous window of opportunity while their wives were in a shopping induced bliss. All I know is, this past month my kid’s backpack overflowed with officially licensed character birthday party invitations on a daily basis. I swear he was handed more cards than a man with a neck brace in a room full of personal injury attorneys. I thought, “Hey, is my kid popular OR WHAT?” I like to think so, but my wife brought me down to earth and explained the school’s policy that dictates giving invites to the entire class. When did this start? When I was young, I was allowed to invite five friends and that was it. We learned rejection at an early age and we liked it, dammit.

My wife, of course, thinks this is all great. My son loves parties, and she gets to gab with the other moms. I, on the other hand, have only one thought: “Holy crap, how many gifts do we need to buy for these ankle biters?” I seem to recall birthday parties where I received matchbox cars and baseball cards and was happy as a clam. I asked my wife, “So, what do we have to spend, like $5 each?” I can hear you snickering right now on how clueless I am. Apparently, I could get by for no less than a plastic piece of junk that requires 16 batteries which just so happens to have a Spiderman decal on it, boosting the price to $67.

It seems the new etiquette dictates that the value of the gift is directly tied to the extravagance of the party being attended. And parents these days are throwing bashes for their little tykes that make Puff Daddy’s soirees look modest in comparison. The list of accoutrements at recent parties my son has attended have included: the various renting out of entire rec centers, amusement parks, and water parks, ponies, a magician (weird), a clown (scary), a clown magician (double weird and scary), a rock band, and — I’m not making this up -– two monkeys. If they made non-alcoholic Cristal, I’m sure it would have been served. Again, harking back to my youth, my cronies and I had parties that consisted of pin-the-tail-on-the-donkey, a large pizza (two if mom had a coupon), and a goody bag containing a plastic car the size of my toenail, a noisemaker, and a stale Tootsie Roll. Apparently this lame scenario would net my son a yo-yo, a broken car, and a stick of gum.

Speaking of goody bags, I now know where the Oscar producers get their ideas for the elaborate gift baskets they give to the winners –- they take a look at their kid’s party favors. Is a Nokia cell phone and a spa certificate really appropriate for a 5 year old? I’m not only judged on the success of the party, but my success at keeping the party going after they’ve gone home, as well. My wife recently accompanied one of her friends on a 20-mile trek to find the “just right” half-inch plastic dinosaurs. Not just any molded trinket from Target would do, despite complaints of tired and achy feet. From what I can gather, they were in search of tacky favors that were “charming” -– no easy task, I can assure you.

I may make light of all this, but on another level I find the trickling down to our five year olds of our society’s excess and adoration of consumerism rather disturbing. We’re setting a bar for our children’s expectations that someday we will not be able to surmount. The media every day is bombarding them with the idea that multi-million dollar homes on each coast, a fleet of cars (consisting of at least one 8 mpg all-terrain vehicle), and 6.1-carat pink diamond rings is a normal American lifestyle to strive for and achieve.

We want our gadgets smaller so we can carry more of them, and our McDonald’s bigger so we can consume more of it. NBC has even taken to “supersizing” Friends, for chrissakes. Our parents have shed their Hippie ways, and mass consumerism and excess has become the norm. Jimmy Carter said in the seventies that “too many of us now worship self-indulgence and consumption”. He was right -– and apparently we didn’t want to hear it. He lost by a landslide to Ronald Reagan, and the Gordon Gekko “greed is good” era went into full swing. Somehow it became no longer acceptable to take the kids to Chuck-E-Cheese and give them a handful of tokens each, we now make excuses for it. What was once accepted as a fun time and a big event is now the object of ridicule.

I’m not advocating to shed all of your worldly possessions and to get thee to a nunnery. But part of the magic of childhood is being able to find joy in the simplest of pleasures, as witnessed when our young tot has more fun with the box than the gift that came in it. Why take that away from them? Why force a wellspring of glut and competitiveness on them at such a young age?

Now, if you’ll excuse me, I need to start planning the venue for my son’s sixth birthday next year. NASA doesn’t just let you book the space shuttle at the last minute, you know.