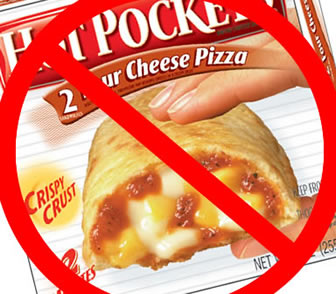 A few nights back Kim and I were scrambling to get dinner together before she had to dash off. Amidst the hubbub, she saw me loading up the griddle with buttered bread and hamburger slabs for our patty melts and warned, “Don’t let Luka grab for that griddle.”

I was holding my six-month-old boyo in his sling while I cooked, so he was indeed within grabbing range. Even so, I couldn’t resist saying, “Well, that foils my plan to make him crawl across it Tony Robbins-style.”

She half-smiled, and looked at me with pity. “I have only two words for you,” she said. “Hot. Pocket.”

She had me dead to rights. The Hot Pocket Incident of 1997 is my own personal Day That Will Live in Infamy.

My daughter Neve was a wee bit back then, the first child Kim and I had together since we had fallen madly in love two years back. All told, Neve was our third – I had a daughter from my recently-deflated marriage, and Kim had a nine-year-old girl of her own. In those days, I was in militant denial regarding my destiny. I didn’t think of myself as a “father”, but as a “man who had kids”; my work defined me, not my progeny. Some strange compulsion drove me to build a family, sure – but I left the maintenance up to Kim. While she shoveled progressively larger handfuls of her self into her identity as “mommy”, I did the minimal amount of work required to prevent my kayak from capsizing in the middle of Shit Creek.

Kim was still working back then, and our nanny had every Friday off, so Kim and I took turns working from home – which, for me, meant getting Neve to sleep as quickly as possible so I could return to my “real” job. On one of my days, while Neve was snoozing on my chest, I realized I was famished. Rather than wait for a convenient moment, I nuked a Hot Pocket and sank back in my chair to finish it off, all while holding Neve tight against me. I put the snack to my mouth with my free hand, bit into it, and watched in slow motion as a steaming wad of cheese and sauce fell from the pocket and onto the bare skin of Neve’s upper arm.

My little girl bolted out of sleep and let out a scream I could have sold to Quentin Tarantino. I dashed to the sink and madly splashed cold water on the wound while I cooed madly to her, my head racing all the while about how I’d explain to my wife that I’d maimed her baby. By the time I had calmed Neve down to a few pathetic sniffles and returned to my chair, I had devised a strategy: feigned stupidity. Stupidity, after all, was what got me into this mess – it could damn well get me out of it. What? There’s a mark on Neve’s arm? Heavens to Betsy…

The plan died on the vine hours later, when Kim crossed her arms and looked me dead in the soul. “So,” she said. “How did Neve’s arm get burned?” I lost the wit to lie. Kim has a BS detector with a one hundred-mile radius; standing this close to the epicenter, I hadn’t a chance. She put her mouth straight and cocked her eyebrow – a pose known in our household as “The Look” – and said, “You’re a bad daddy.” I just shut my mouth and took my blows – after all, they had my name written all over them.

Even today, this evidence is used against me in the court of Kim. Not without reason; three children later, I had shed a few layers of selfishness, yet was still prone to inflicting injury through exuberance. I have stepped on a fair number of little toes and fingers while darting toward an emergency, taken hall corners too sharply without compensating for baby, and knocked more craniums against crossbeams during airplane rides than I will ever admit. It’s no wonder the Goddess made these buggers so durable – it’s an evolutionary defense against fathers.

Progress is not wanting, however – at least on the microscopic level. Given enough time and the regular deprivation of sexual favors, even this zebra can change his stripes – or, at least, paint them over in less garish colors. I can proudly say I haven’t caused anyone significant harm in at least two years. Perhaps this comes with age: as maturity descends, the fever of urgency starts to subside, and the days, rather than seeming abrupt, become long and languorous. You learn to soak up the minutes and hours slowly, like a wine connoisseur sampling the first draught of the season. You become protective of this world’s more delicate pleasures. You develop a keener sense of mono no aware, of the fragility of life – especially that of your progeny – and a feeling, like a Mack truck bearing down fast with headlights blazing, that one day you’ll blink and there will be no one left who needs your protection.

Yet for me, that’s only a chapter of a larger book. Greater than age has been the slow yet profound shift in my psyche as I become more embittered with the Rat Race. In my early years as a parent, I lived for the capitalist game – climbing the ladder before the rungs were even installed, scaling my way to greater responsibility and fatter paychecks.

As I became more enamored of my family, and viewed them more and more as the primum mobilum of my life’s work, I began to realize how badly this Affluenza had decayed my soul. With scaled-back hours and the revival of my extra-curricular interests – writing, music, and theater – came the lightning-flash that my life had been topsy-turvy. I had created a workaholic’s paradise, and my family filled whatever vacuum I deigned to leave in my heart. Now, my work was the servant, and my family had taken its rightful place on the throne. I was less apt to whack little heads on sharp corners or drip hot food on unsuspecting skin. Those are the actions of someone who’s going through the motions of “this family thing” because he has “better things” to do.

There is nothing better, however, than a little boy who welds himself to your leg as you try and head out the door for your 9 to 5, or the bear hug of a baby girl for whom Mommy and Daddy are the Alpha and Omega.

But even though “I’m much better now”, the Hot Food Baby Ban is still in full effect, and Kim’s eagle eye is ever scanning the horizon for a repeat offense. Take heed, workaholic spouses – slow down. Let off the gas; work from home whenever you can; start a financial empire on eBay – do whatever it takes to mold your work around your family instead of vice versa. As my tale of woe clearly proves, there is no statute of limitations on carelessness.