From the Gentle Discipline Files 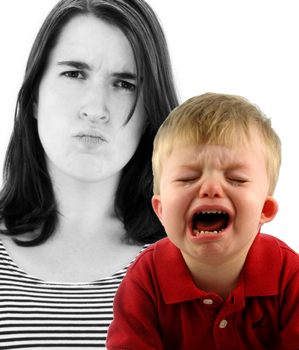 Frazzled, new mother of two with a stern look and serious voice says, “Satchel. Do. Not. Hit. The. Baby.”

Two-year-old boy with an impish grin and a far cry from his inside voice chortles, “Bwahahaha!”

Dr. Sears, that prolific know-it-all, wrote that the attached child will often obey his/her parents after a disapproving glance because s/he wants to please them. Well, yes, that worked when Satchel was, uh, not two.

I’m definitely not from the “children are manipulators” school of thought, but I gotta admit that my two-year-old really has me in a bind, especially now that I have turned his world upside down by recently birthing another child. If I go beyond the “gentle” realm of discipline and actually raise my voice (which is bound to happen when one is parenting a very needy milk monkey and a very active toddler), Satchel will give me a look of pure shame and throw himself on the floor to cry. My husband is able to ignore this behavior, but I can’t. I have to apologize, rub his back, try to pick him up, and talk him through whatever it was that led us to this point.

So let’s review my two approaches thus far: (1) try to be gentle, but stern, and get laughed at, or (2) raise my voice and cause my son major trauma.

My husband, who might be considered the slightly-more-effective disciplinarian, also has two methods. The self-explanatory “ignore the tantrum” method mentioned above and his soon-to-be patented “reverse psychology” approach. The reverse psychology approach is interesting in that I believe it isn’t something a mother, well at least this mother, is hardwired to do. It involves encouraging the child to touch hot, sharp, prickly, pointy, and slimy things all the while knowing that the child will most likely “chicken out” before actually doing so, thus learning the lesson that they “don’t touch” the object of desire. When generalized to other circumstances, the reverse psychology approach can also involve things like tasting “yucky” things, such as prenatal vitamins, to learn the “don’t eat” lesson.

The reverse psychology approach does have its limitations. Some situations, such as crossing the street unsupervised, do not lend themselves to this method. For big picture issues such as this, my husband and I have recently stumbled upon the “repetition” approach to gentle discipline. The repetition approach has worked really well with the crossing the street scenario, as Satchel has been known to pipe up with “No cross street. Hold hands!” in the middle of dinner, while in the tub, and in various other places that have no link to a street or fast moving cars. But he does willingly hold hands near all streets and parking lots. As we try to add new rules, such as not hitting the baby, not throwing toys, etc. we start with “No cross street. Hold hands,” and add on from there.

Two-year-old boy with a somewhat puzzled expression throws another toy, but slightly softer.

Two-year-old boy looks at mother with a somewhat less puzzled look, but does not throw another toy.

Two-year-old boy shrieks, “NO CROSS STREET!” and runs out of the room.

A small victory, yes, but what happens when we get more and more rules?

Mother with perpetual dry mouth recites, “Satchel, no cross street, no hit brother, no throw toys, no shopping at Wal-Mart, no smoking, no staying out past midnight, no voting Republican, no changing mommy’s diaper in front of your fiancée…”